As well as ensuring that we finally get to see the Andes we had another motive for taking the tour up into the high mountains – it goes on the same road that passes over to Chile and would take us almost to the border so that rather than hearing about the conditions we could see and assess them for ourselves. At the start of the day the guide wasn’t sure how high up we’d be able to go as no one knew what stage the snow clearing was at, but we called in at the first police point and were in luck, the Argentinean side had been cleared but the pass itself was still closed as the snow had been worse on the Chilean side.

It was perfect mountain weather – clear blue sky. When we stopped off for morning tea in Uspallata we knew that the pass was still closed by the number of lorries around town (most had ditched their trailers at the local police post and were riding round town in the cabs), they were everywhere, waiting for the pass to re-open. It was also absolutely freezing cold and we were still only at 1721m.

This does not bode well as we were already wrapped in thermal layers with full winter gear on and on this trip we’ll be going higher and be there at night too without the warming sun when temperatures plummet.

There was barely any traffic as lorries not already on the pass when the road closed were not allowed to start it and those that were, were holed up in Uspallata and no one else was on the road because they couldn’t go anywhere. We were lucky enough to see a few herds of wild vicunas which apparently is rare as usually traffic scares them away from the road. At our first proper stop we visited a random small stone bridge which probably was once really important but our Spanish abilities are practical and don’t extend to interpreting what a tour guide tells us (unless it’s to do with food and then we understand). We did understand when the guide pointed out our first two condors soaring over the mountains.

At the highest point of the tour we got to gawk at Mt Aconcagua, the highest summit in the western hemisphere at 6,960m, only a few kilometres from the Chilean border. Even standing looking at it from a height of over 2700m it was clear just how big it is and the weather was just perfect. Just down the road we stopped at Puente del Inca which LP claims is one of Argentina’s most striking wonders. Situated at 2720m it is a natural stone bridge with an old spa underneath stained by sulphurous thermal springs. We had to wade through the snow to get to it, which was a huge amount of fun as it was a good 2 foot deep and we’ve never been in that much snow before.

For lunch we stopped at the local ski resort which has yet to open and had great fun playing with the powder snow there. Marie decided to be adventurous and see just how deep the snow was between 2 buildings, only to nearly disappear down a very deep hole after a couple of steps. Luckily only the right side of her body vanished down it so she was easily dragged out.

As we started the return trip home traffic started going past us both ways – the pass had re-opened. The guide told us that another snow storm is expected on Saturday and Sunday, which suits us as we want to cross tomorrow (Friday)! Word obviously spreads quickly as by the time we had got to the bottom of the pass the queue of lorries waiting to go start the pass was 2 deep and kilometres long. We’ve never seen a queue quite like it. 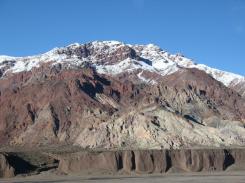 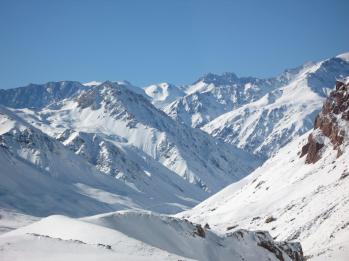