As we spent the day exploring Mendoza it was cold and trying to snow (even though Mendoza is a only 700 odd metres high). We scored ourselves some hats and gloves before the day was out as it was obvious that we couldn’t wait any longer to get them without risking frostbite. 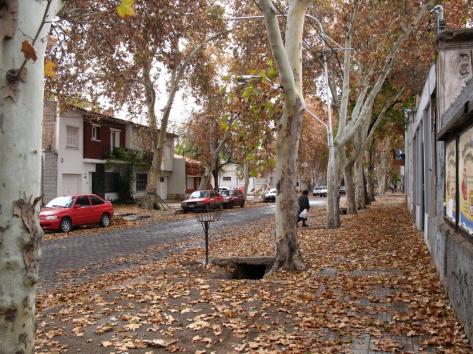 Mendoza is a pleasant city and is probably really pretty when all the trees are green. However, we got to enjoy kicking the leaves down the quiet backstreets instead. We walked from one plaza to another, and called into the Museum Fundacional somewhere in-between. We got in free with the wave of a hand even though Lonely Planet says there is a charge, but the place was deserted and it didn’t look like they see many visitors. The museum protects the foundations of the original town which was destroyed by the earthquake in 1861. Back in the city centre we watched a huge student protest that we later saw on the telly after they seemed to have stormed city hall, and Marie got a new t-shirt for NZ$3 as it has a small hole in the side but still looks better than our other travel clothes.

The pass over the Andes remained closed, so we booked ouselves onto a tour of the high Andes and spent remainder of the evening after dinner in our bliss warm hotel looking at possible alternatives to get to Chile, which all still suck.