Our 2 hour fight from Cape Town to Windhoek, Namibia landed early. Immigration was also a speedy affair. We were pleased as it was late. We’d booked a guest house the day before and through them organised a taxi transfer. It was expensive but there are a lot of dodgy taxis in Windhoek so it’s important to ensure you get a safe one, particularly after dark. Our driver John was a very nice and helpful guy. Well drilled, he was already expecting to have to wait while we bought a local SIM card so we didn’t even have to turn on our charm. He drove the 20km to the city slowly and down the middle of the main road. It is dangerous to drive in Namibia after dark because of wild animals, and in fact rental companies forbid driving of their vehicles between sunset and sunrise.

The next morning our guesthouse called us another safe taxi. There is little to see in the city but that in itself is interesting. We got it to drop us at the main (only?) tourist site, a German Lutheran church that looks like a gingerbread house. In the middle of a roundabout, the roads were almost dead. We found the city centre, it felt busy by comparison despite being incredibly quiet. We hit the ATM and then got coffee and carrot cake as a last hurrah to civilisation.

After calling by the guest house to collect our rucksacks we spent a couple of hours at the rental company being shown all the things we need to know with our 4X4. Our first challenge was navigating to the fuel station. Fitted with a second fuel tank to give long range capability, paying for 185 litres of fuel cost a small fortune.

It was exciting to hit the highway south. A big sealed road with hardly anything on it, it made for an easy introduction to driving in Africa. Marie saw her first wild animal, a warthog that she thought was a sculpture until it liked its lips and wagged its tail. At a town an hour south we did a big supermarket shop. It wasn’t a great shop in that it didn’t have all we hopeful for but we definitely weren’t going to starve.

Shortly after we turned off the highway to head west and onto a more typical Namibian road – gravel. Built for the terrain the 4X4 handled it well. Parts of the road are very corrugated and make for interesting handling. Emma had a few fun moments learning how to drive a manual again. It was a lot of fun driving into the sinking sun in the middle of nowhere.

Namibia is known as the land of endless horizons, thanks to its vast distances and epic landscapes. It is the second least populated country in the world (after Mongolia), with only 2.2 million people.

We soon realised how vast the distances really are with literally nothing but open landscape and not a single other vehicle to be seen for hours on end.

We’d downloaded a Namibia camping map before we arrived and on the way picked a campsite to head to. We only just arrived before sunset.

A small site with just 4 spaces we were the only ones there except for a local in a tent who we think was the family’s help. It being the first night and not having our ‘system’ yet we spent the night getting ourselves organised and digging out our stuff we’d packed for the vehicle leg of our trip. We also now understood why the rental guys had told us to open the side flap we have in the rear canopy, on gravel roads it helps the dust circulate and blow out. We hadn’t remembered to do this and everything in the back was filthy, totally coated in dust.

Thankfully after so many horrendous beds on the trip so far we found the roof tent incredibly comfortable. Being in the desert the temperature dropped 20 degrees overnight, but Marie was happy with that as the guy that owned the site had told us it was currently too cold for snakes. He also told us it was a new moon, it was as black as a bag and there were millions of stars.

It goes dark before 7pm so we were in bed early and awake early. We were packed up, breakfasted and on the road before 9am. Our destination was Sossusvlei and we were still 3 hrs away. We loved driving the deserted road, and spotting the occasional wildlife like the odd zebra.

A UNESCO World Heritage site, Sossusvlei is in the southern part of the Namib Desert, in the Namib-Naukluft National Park. More than 300 kilometers long and 140 kilometers wide it consists of seemingly endless huge sand dunes. It’s most famous site though, photos of which are regularly used to depict Namibia, is Deadvlei. It’s 900-year-old fossilised Acacia trees dot a white clay pan nestled in amongst big orange sand dunes.

After so many hours of gravel and despite being in the middle of nowhere the 61km from the entrance gate to a parking area is tar sealed. From there to the parking area for Deadvlei is 5km of deep sand 4X4 only track. You can take a local 4X4 shuttle service but we weren’t going to pay for that when we’d got a 4WD. We made it. We only nearly got stuck once, luckily Marie realised this early and after a few metres in reverse we recovered. The way back was much easier as we’d worked out some of the better lines to take.

It was a hot kilometer walk over the dunes to reach Deadvlei, the advantage of being there early afternoon though was it was quiet, for a long time there was only us and one other. It was just like you see in the pictures.

With a long journey north to make we wanted to get a couple of hours under our belt before calling it a day. Our route was a common way to get to Sossusvlei so the road was hideously corrugated – it was slow and not enjoyable. Finally with the sun setting we reached the campsite we were aiming for. The camp was located a couple of kilometres off the road but the reception was located at the lodge down a 6km track in a vast barren moon-type landscape. It was stunning, really quite a magical place. With 4 camping spots and only 2 pre-booked, we got lucky. 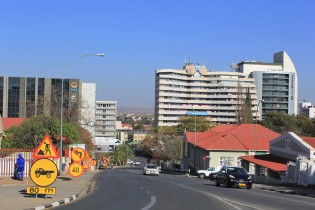 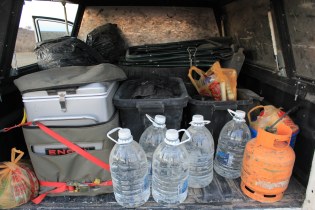 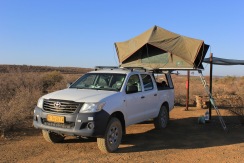 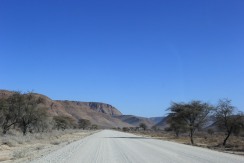 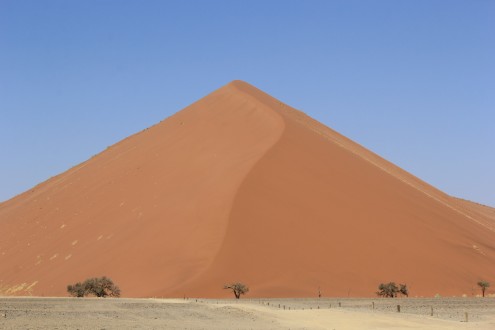 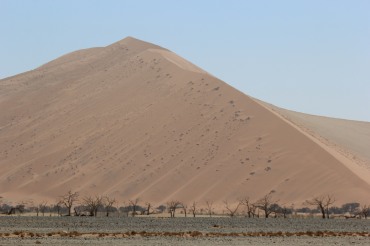 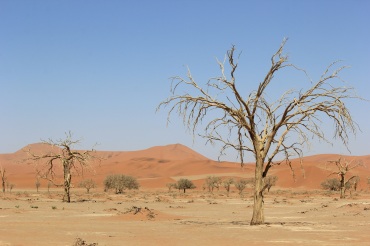 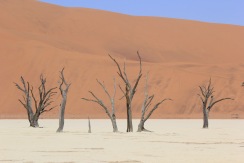 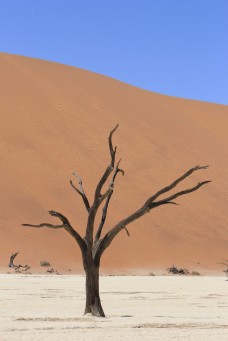 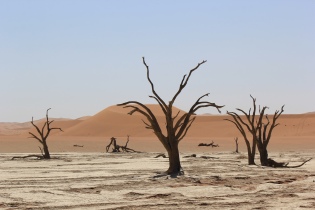 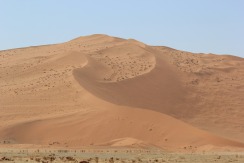 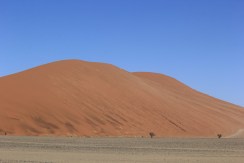 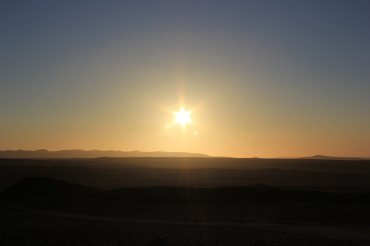