Our driver was 10 minutes early, which was a pleasant surprise as usually our drivers are 10 minutes late. He was a young guy, as well groomed as his car, which we figured by the tortuously slow speed we headed off down the gravel roads, was his pride and joy.

We tried to relax and enjoy the scenery but with quite a bit of travelling to do to get to Bishkek we kinda wanted him to put his foot down a bit. Also his windows didn’t work so we had to stop if we wanted to take photos. We passed through beautiful mountains and valleys but only stopped to photograph a huge herd of yak in a valley. 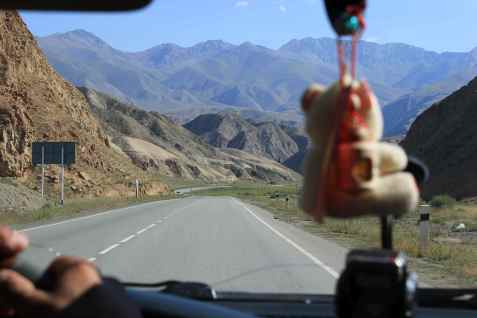 When we came off the mountains we hit the perfect seal of the main road and eventually he found the accelerator. Given the guidebook said it took 3 hours we were chuffed to arrive in Kockhor after only 2.5.

We waited around half an hour for the bus to Bishkek to fill but as we were one of the first there we got to nab our favourite seats. Finally we went whizzing out of town on beautifully sealed dual carriageway. Thankfully it was a little overcast so the heat wasn’t too bad. The arid walls of the valleys we passed through looked like what we’ve seen in Oman. We could tell we were approaching Bishkek by the haze, snow capped mountains beyond it were faintly visible.

Our arrival into Bishkek didn’t endear us to the city. We’d booked somewhere to stay a couple of days before. It’s the busy season and while there should still be no issue finding a bed it saves time messing about and we don’t want to end up in a dorm; we’d like our own room with our own bathroom when possible.

We knew the place we’d booked was near to the bus station, deliberately picked as buses to Almaty, Kazakhstan also depart from there making it an easy trip out. Problem was we didn’t know where it was on our map. We just had the phone number and address and knew it was close. 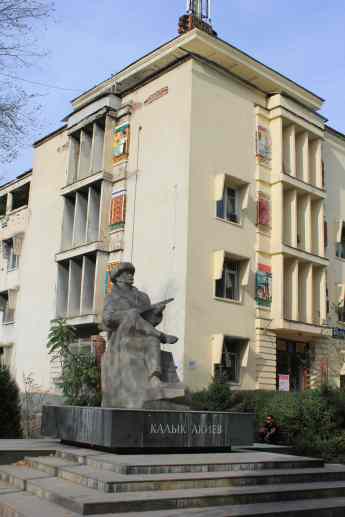 First we tried a taxi and when they sent us to find a marshrutka we knew it was close. A helpful man then used the last 2% of our phone battery trying to help us call the hostel for directions (which we could have done ourselves) but when the battery ran out before he found out he offered to take us there for 300 Som (a ridiculous price) even though he didn’t know where it was. Meanwhile a fight broke out across the way, a drunk old man next to the helpful man touched Marie’s boob (and got a very clear response) and then kept trying to get her attention by touching her arm in an entirely non-threatening way but she was equally clear.

We walked away from the helpful man as we knew he didn’t know where it was and we were starting to doubt his sobriety. We headed back to the taxis with the plan of just paying whatever fare was needed to get us there. We found a young guy who looked it up on Google and gave them a call to get directions. Meanwhile helpful man comes over with another big old man who speaks a bit of English and wants to know why we won’t go with his mate even though we knew he had no idea where he was going so it was an easy answer. Then they start having a heated argument with our new driver, we both stepped away when it looked like punches might be thrown. It fizzles out and our new guy agrees to take us, we asked the price not really caring about the answer and quickly piled in. We got out the car park with just one more argument between the big old man and our driver.

Then we had the shortest cab ride ever. Even our driver was surprised to find to was literally round the corner. In fact the hostel backs onto the bus station and there is even a gate to it… Our driver generously reduced our price. The shortest taxi journey ever cost us NZ$2, we would have happily paid much more. We thanked him for being so decent.

It was a good reminder to ourselves a) not just write out the address and phone number but to look at a map too and b) never enter a new city with a relaxed attitude. Everyone we have met so far has been so helpful and friendly so we hadn’t put our big city heads on. We knew that the station has a reputation for being chaotic even for locals to figure out the transport, but we didn’t expect that.

We wondered if we had arrived in Ulan Bataar take 2 (it’s a rough city fueled by drunkenness and violence, a man tried to punch Marie’s head off there). When we later spoke to someone who worked at the hostel they said the drunkenness and fighting was common but inappropriate touching was not usually an issue.

Our room was the best we’ve had and even had the luxury of a fridge. After showering and putting our laundry in we got into full traveller mode before heading out to see if Bishkek really is that bad. We decided to head to the main street so studied the map and set off.

Civilised Bishkek was only a kilometre or so away, so it didn’t take us long to find. We figured it was just the area we were in – the bus station combined with the nearby bazaar which doesn’t have a great rep.

It was enjoyable being out in the late afternoon so we kept wandering, finding some of the main things there is to see (Bishkek doesn’t really have any key sights).

We figured it made good sense to be back before dark so when the sun started to get a bit low and we realised we’d walked a long way there is nothing to focus the mind more on sussing out the local public transport. The guidebook says there is an app that helps you work out what marshrutka routes you can take and having not used our data we downloaded it. As we waited at the stop for the right one to come we clocked that unlike in Osh when you pay the driver as you exit, here you pay as you get on (10 Som approx 20 cents NZ). We jumped on like pros. 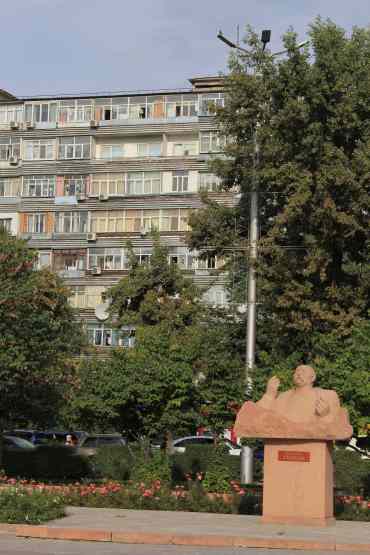 We’d been excited to discover there was a small modern supermarket round the corner from the hostel and had been dreaming of what fresh products we might find. Marie hadn’t risked breakfast with having a long travel day in case the antibiotics hadn’t worked.

The fresh fruit was crap but the dried fruit and nuts were amazing and after having no luck in 3 pharmacies amazingly it had hand sanitiser so we got excited and bought 2 bottles. We also found Coke Zero, red bull, yoghurts and brown bread. Dinner was sorted.

The next day we had a slow start as we’d first sorted out our money and laundry etc, so we had a late breakfast before catching a marshrutka to the area where we had finished up the day before.

We explored squares and parks and enjoyed the sculptures from Bishkek’s burgeoning arts scene. The temperature was perfect (late 20’s with a slight breeze). We enjoyed being in civilisation whenever we wanted a break as there are lots of nice bars, restaurants and cafes.

It is a nice city if you can tolerate the occasional drunk, and has a beautiful backdrop of snow capped mountains.

On the way back to the hostel we learnt how many people you can squeeze into a marshrutka. Answer: when you think it is not humanly possible to squeeze in a single person more, on gets a family of 3. 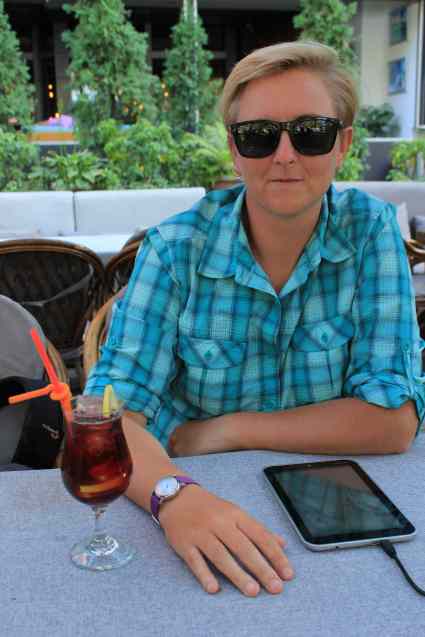 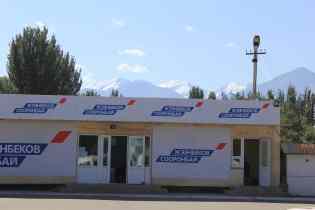 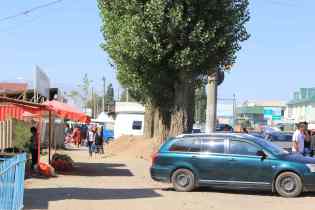 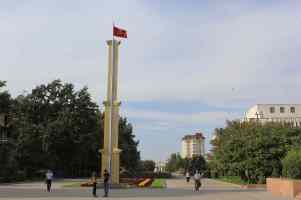 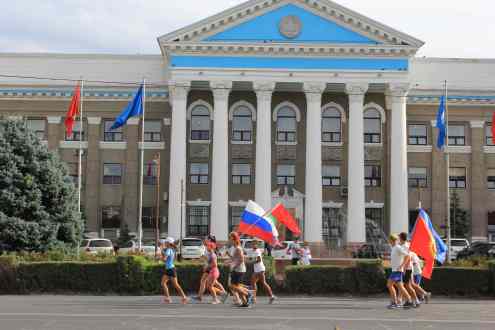 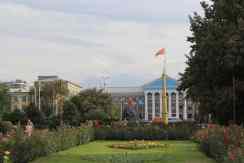 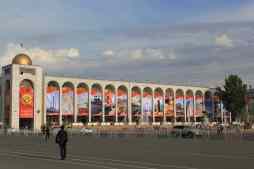 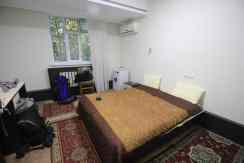 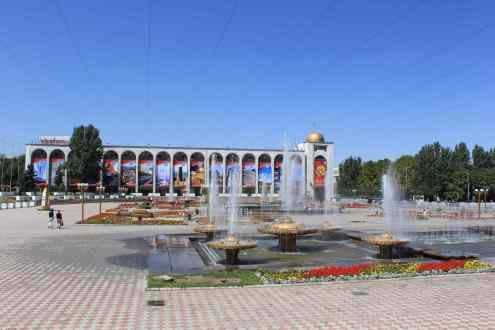 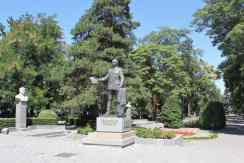 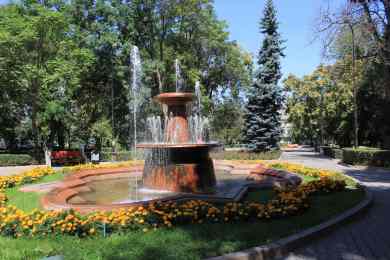 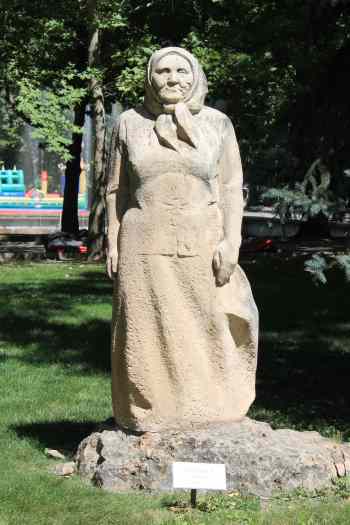 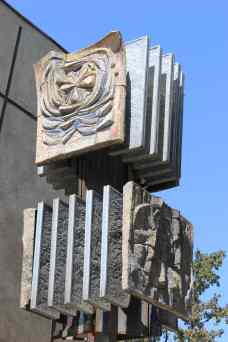 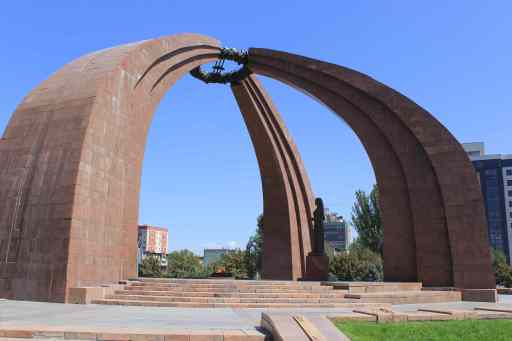 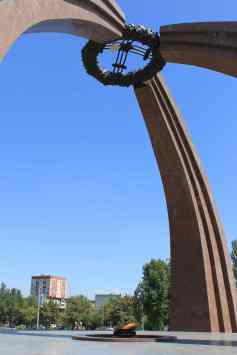 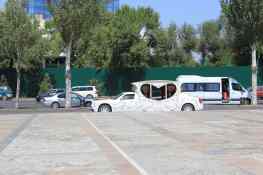 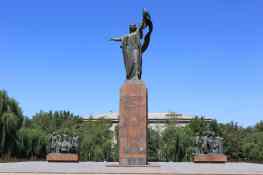