We were on an 8:21am train to Yazd so our accommodation did us an early breakfast and dropped us off at the train station for 8. It didn’t arrive until 9. We looked enviously at the old rolling stock that had earlier arrived from Tehran as our rather shabby modern train arrived. It was dirty and boiling hot. It you think about an modern train that has no opening windows so you rely on the aircon but someone forgot to put the aircon on and stuck you in a desert you get the idea.

Thankfully when we finally pulled out of the station some faint aircon came on to take the edge off. It was an agonising slow trip, lots of work is being done replacing or building more tracks next to the existing one so we’d slow to a crawl frequently as we passed the workmen. At every station we stopped for what felt like eternity. For the first time the headscarf was hard to bear.

Slowly the train emptied and Marie realised that there was a small open window at the end of the carriage on the side out of the sun and the seats were free so we decamped and eventually as it drew time to get off it was also enjoyable. It took 4.5 hrs.

Yazd has a well organised station, someone soon pointed us in the direction of the exit when we headed the wrong way and outside the gate was a taxi kiosk when you pay a fixed fee to get into town and off you head with a driver. We got a slow and steady granddad. We’d picked a hotel out of the guidebook to head to near the Friday mosque so got dropped in front of it and navigated the narrow backstreets on foot. It was a bit of a walk but we were figuring being off the main tourist runway might make it better value.

We were wrong. They want US$40 for a tiny dark box room with a shared bathroom a mile away. We passed and headed back towards the mosque as we’d passed a bunch of other options on the way. A second place had its own bathroom for the same price and it had 4 beds in it so more space. It was an improvement but with other options Emma went to check out another. She returned having scored a nice hotel – the room was supposed to be US$80 but the woman on the reception desk was a hustler and we landed it for 40 on the basis that we’d stay 2 nights. The joys of low season. Not that you can tell its low season by the number of tourists. Also don’t know how people cope when its hotter (it was 28C when we arrived which felt a lot cooler than the train).

We discovered we had a heated towel rail so did some laundry before heading out. Yazd has a mud brick old town which was where we were staying. According to UNESCO it is one of the oldest towns on earth. We did our usual wandering of the local area to get a feel for it and to get our bearings. Then found a rooftop art café for tea. 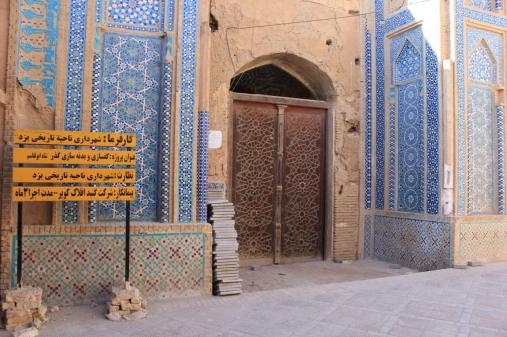 Everywhere closes in the afternoon and opens again between 4-5pm. We needed to change some money and having found one place which would do it but their rate was a bit low we decided to get a taxi and go and check out the Fire Temple as there was another exchange near there that was supposed to have better rates.

The flame at the temple is said to have been burning since AD 470, it also had a small museum explaining about the Zoroastrian faith. It made a nice change to have explanations in English (Uzbek museums just had exhibits labelled in English but no explanations were translated). After we successfully changed money and we caught a taxi back to Amir Chaqhmac Square. There is actually life here at night which makes for a nice change. The other nice change from Kashan, is being a bigger tourist destination we have a heap of traditional Iranian restaurants to choose from right on our door step. We chose one on a roof top and finally found really good Iranian kebabs. 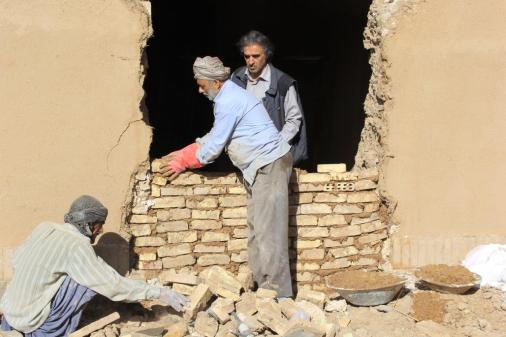 The next day we did some quick re-planning of where we were going to aim to go during the rest of the time we had. We decided it made most sense to zigzag and then fly back to Tehran from Shiraz as that will make best use of the time. There was a travel agency not 2 mins walk from the hotel so it was easy to suss out options.

While it was still cool (it had apparently gone down to 10C overnight, just not in our room) we headed off to explore the main mosque before it got busy and then more of the backstreets, spending 2 hrs aimlessly wandering. Well off the tourist run we explored residential areas before leaving the old city completely. We followed its perimeter until we hit a main street that took us back to near where we were staying, we carried on down the street and found a gold jewellery bazaar. On the way back we visited a few mosques before taking a break in Amir Chaqhmac Square and heading back into the old town to make pure way back towards our hotel. We found clay oven bread being made in the backstreets and watched for a while. When we got back near the hotel we found a different tea stop and took a break from the heat of the day.

After we caught a taxi to the Towers of Silence on the outskirts of the town. Up until 50 years ago the two ‘towers’ on the tops of hills were used for sky burials. You’d farewell the dead at the bottom of the hill and they would be carried up. The structure is a big circular wall with a gate in it. In the middle is a hole that was 6m deep. The dead were laid out in 3 rings, children in the middle, then women, then men on the outer. The door would be closed. After 4 days the 2 people that had special permission to enter would go in and sweep all of the bones into the pit.

We got back just as the sun was beginning to go down and the exertion of walking up the hill necessitated another tea stop. Before dinner we bought the Shiraz to Tehran flight we’d decided on.

Kia kaha to those in NZ dealing with earthquakes. 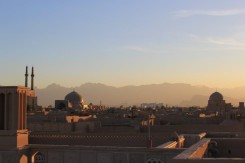 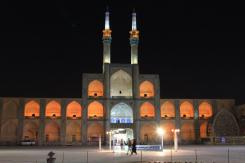 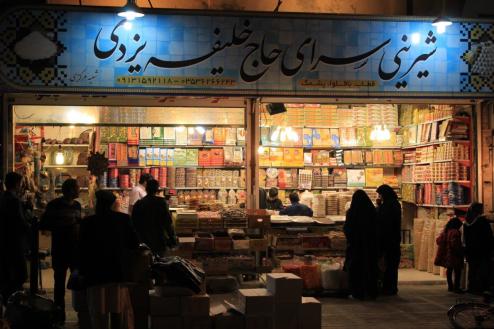 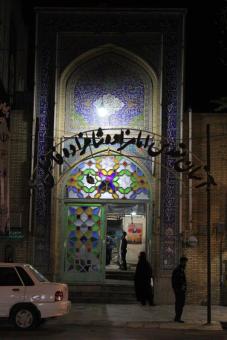 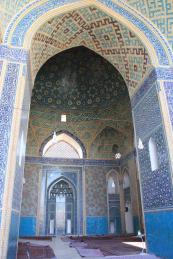 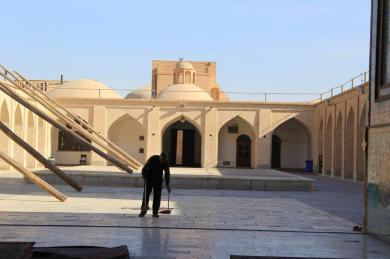 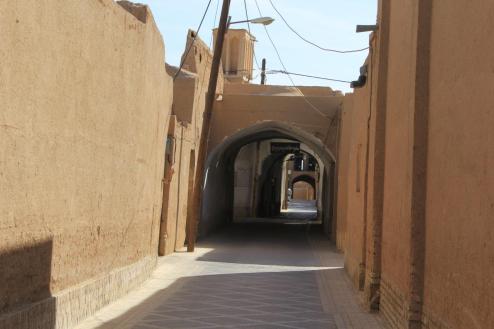 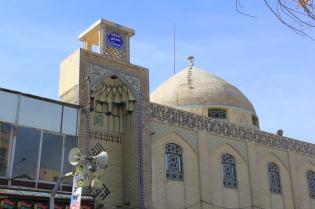 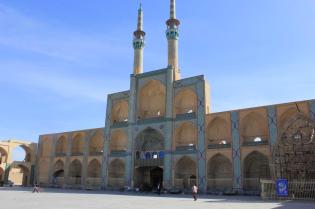 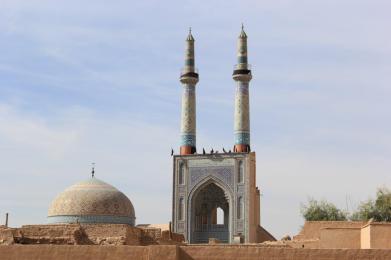 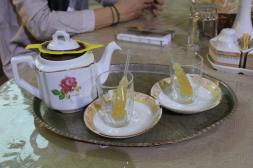