We slept well but still had a leisurely start to the day – we’re on holiday. We reconsidered about breakfast being ok when it gave us both stomach ache so we took a very slow walk to the Registan, our first stop. The guidebook describes it as arguably the most awesome single sight in Central Asia. The 3 buildings are among the world’s oldest preserved madrassas (Genghis Khan having destroyed the older stuff), the oldest having been completed in 1420. They are huge.

We paid the entrance fee and went into each, highlights were in Tilly-Kari Madrassa (the middle one); the mosque as it is intricately decorated in gold and the young girl who took us into her family’s shop in what used to be a professor’s room, where she explained the meaning behind the symbols used in local embroidery so she can practice her English. At only 14 she was already fluent so she is already a long way ahead of most Uzbeks. She said her dream is to be a surgeon and that she wanted to study in Auckland but it would be too expensive without a scholarship.

When we left we took a break on a bench while we worked out which direction we were heading. A woman stopped and asked where we were from (we think in Russian), eventually she understood the answer. She walked off and then came back she was carrying a plastic bag full of grapes. She pulled out a bunch, set the bag next to us, threw her handbag between us and headed off to the nearest shop. She came back 5 mins later with some serviettes and a washed bunch of grapes which she gave to us and then disappeared off. It was a pretty cool random act of kindness.

They weren’t the prettiest bunch you’ve ever seen and we tried not to think about the water she’d washed them in as we ate them (we couldn’t not do after she had been so kind) but there were heaps and with nothing to put them in we were just debating what to do with the rest, as they were too good to bin and that seemed ungrateful. We were just discussing giving them to someone when a scruffy looking man approached and peered into the bin. He couldn’t believe his luck when we handed them to him.

We took a pleasant walk to Guru-E-Amir Mausoleum where Timur’s tomb is, finding another mausoleum undergoing work on the way. The mosque next door was doing a call to prayer, the first we’d heard as we were told they were banned. Despite over 90% of the population being Muslim, religion is pretty low key, there are no bars (at least not we’ve seen) but alcohol is served in restaurants and seems to be well consumed. We don’t even need to wear headscarves to go into mosques. The result is that it doesn’t really feel like a Muslim country. I guess we’ll fix that with the next destination!

Timur was a 14th Century Turko-Mongol military leader who conquered most of the Muslim world, central Asia, and parts of India. He was born near Samarkand. He had built himself a more simple mausoleum in Shakhrisabz but when he died winter snow blocked the passes and he had ended up in this one which he had built for his grandson and proposed heir. It is an impressive mausoleum. Before heading back we took a walk down the road to Timur’s statue.

Despite being on the tourist route we hadn’t seen any restaurants or tea shops, even though it was late in the season there were still plenty of local tourists around , so we couldn’t figure out where they were eating. We found a small shop and decided that snickers for lunch was better than anything a restaurant would offer anyway.

A quick pit stop at the hotel and we headed off in the opposite direction. As we rounded the corner we found a small supermarket (the first we’d seen) and eventually a couple of restaurants and a tea shop. With time to spare tomorrow before our train to Tashkent we were pleased to have found the tea shop.

We got to Bibi-Khanym mosque . It was once one of the largest mosques in the world and we could see why, it reaches up to 41m high. With the afternoon sun meaning much of it was in shade we decided to wait until tomorrow to pay and go in and instead skirted around the outside to take some photos of the parts bathed in sun. Behind it we could see bazaar so left that also for the next day. We crossed over the road to photograph the mausoleum. The guidebook says its not worth the entrance fee so we carried on heading for the cemetery and nearby mosque.

As they came into sight we could see heaps of people visiting the mosque. Too many to be tour groups. We’d heard that there was a mosque set up to pay respects to Uzbekistan’s recently deceased president Islam Karimov somewhere in a Samarkand but given it wasn’t something we were seeking hadn’t found out where. Eventually we figured out we had found it.

President for 27 years, since independence, he was one of Asia’s most authoritarian presidents. He argued that ignoring human rights was ok because it provided the country with stability (not an easy feat given its Muslim population and that it shares a border with Afghanistan). An ex-British ambassador accused Karimov’s security forces of boiling 2 dissidents to death. 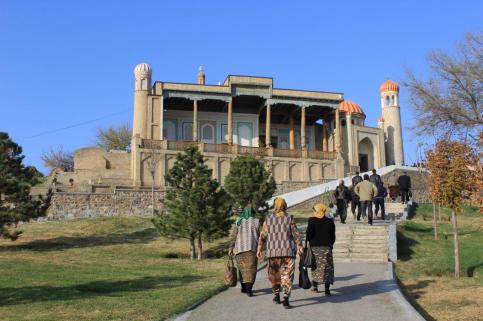 We joined the stream of people. He died on 2 Sept so the police had a well practised system going. They held the crowd on the road opposite the entrance, checking bags as is common here. Women and children were taken to the front. Then as a group we crossed the road and entered. Outside in the courtyard there was a tomb shaped pile of flowers in the middle of a pond surrounded by more flowers. Seats and benches were set off at the sides – men one side women the other. We took a seat. When it was full the police closed it off and an Iman cited part of the Qu’ran and said a prayer and then we all left by a different route. So that is how we came to pay our respects to a dictator. 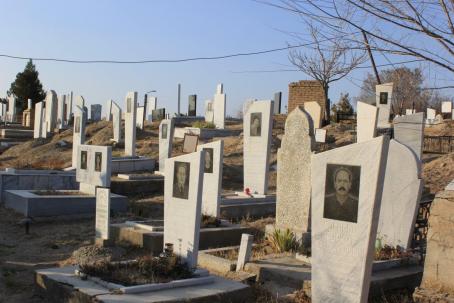 We entered the cemetery via a small open gate. It was a really nice pleasant place on a hill side. A rickety path led the way. We could see a series of domes at the bottom so headed down towards them. When we got there we found it was an amazing series of mausoleums. We realised that we were at the ‘Tomb of the Living King’ which refers to the original shrine. It is an important place of pilgrimage and has rich tile work. With lots of local visitors we soon worked out that we’d taken the back entrance. We also figured that there was probably a ticket office at the front entrance.

We explored each mausoleum, glowing in the low sun. It winds its way down the hill. As we approached the front entrance we could see the ticket office and the police officer with his wand for checking bags. We just acted confident and walked straight out. 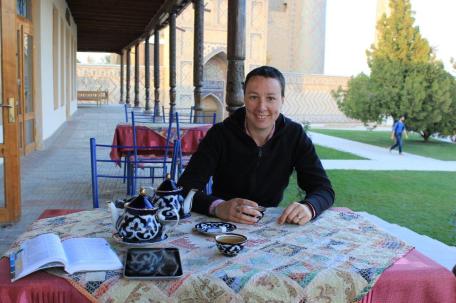 When we got back to the main boulevard we decided to check out the tea shop in the setting sun. We also checked out the supermarket and scored a packet of cheese and onion crisps but better yet as we exited we found they make a range of somsas. When we headed out that evening to find a restaurant we didn’t make it past the somsas but we found you could eat in and they made us tea too all for the bargain price of 9000 som (around 2NZD). Plus we got kudos from the locals for being from NZ. Best dinner out we’ve had here. 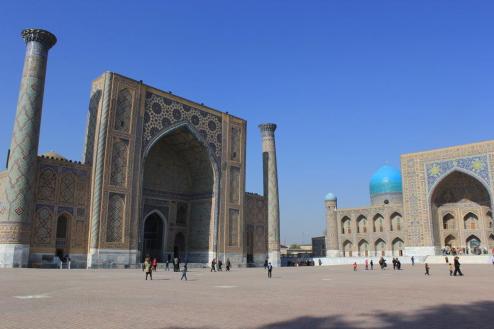 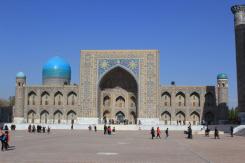 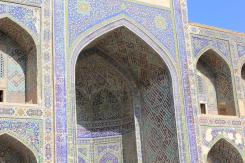 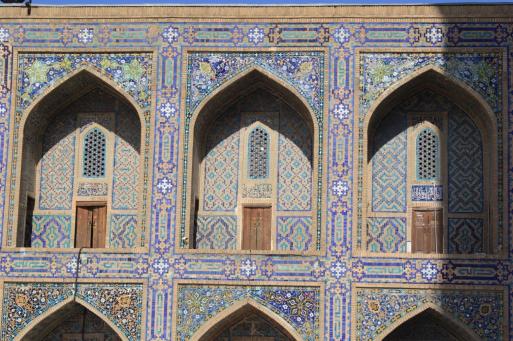 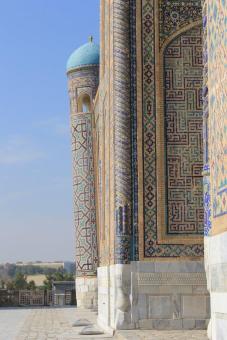 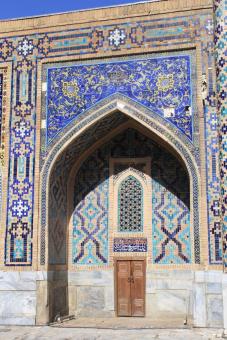 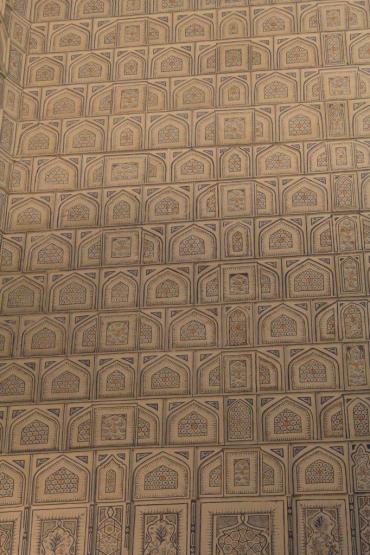 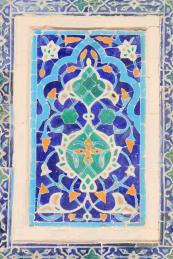 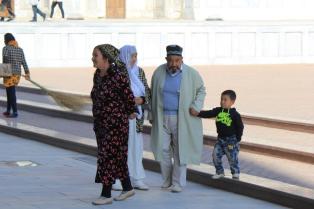 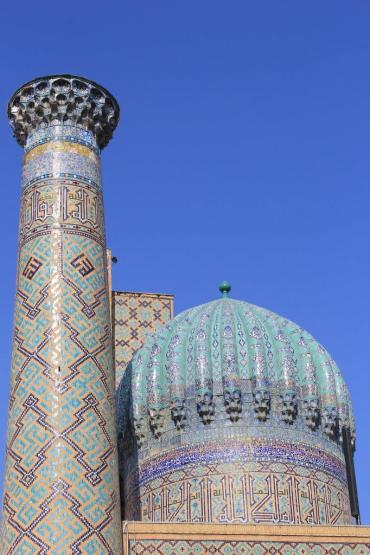 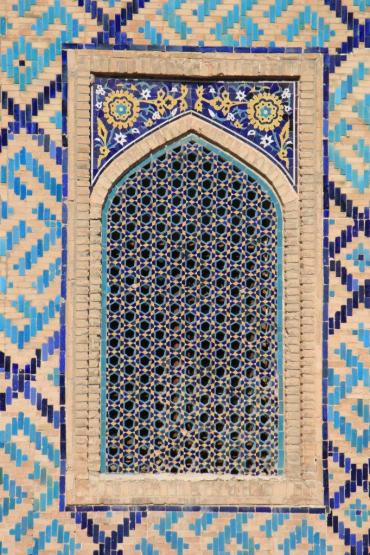 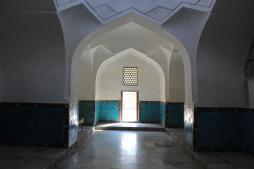 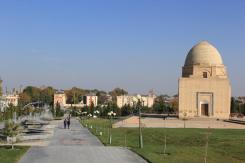 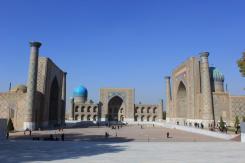 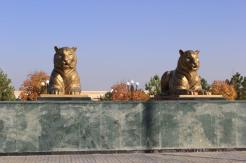 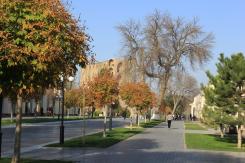 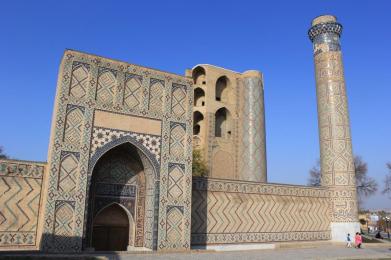 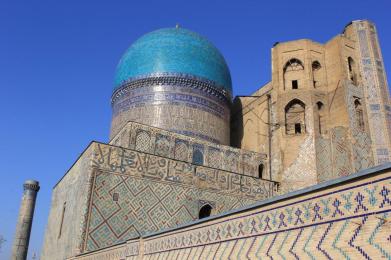 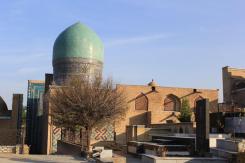 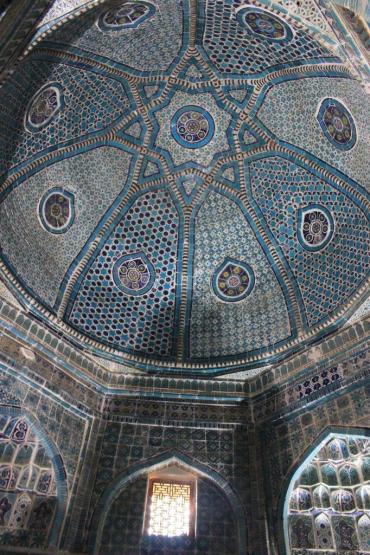