We didn’t need to leave for Bukhara train station until after lunch so we planned on taking the morning slowly. It was just as well as Marie had taken some antibiotics a couple of days earlier that had massively improved her stomach so her body decided it was safe to cough all of the Delhi pollution off her chest and so she coughed her head off all night, and sneezed, and got a runny nose (which is not very convenient as blowing your nose in public is considered rude).

After checking out we dumped our bags off in the breakfast room and talked to the woman who owned it in broken English and broken Uzbek whilst her husband corrected an error on our registration slips. Uzbekistan has stricter registration rules than most of the other ‘Stans’. The rules are a bit hazy but seem to be that it is better to have the slips (or overnight train tickets) for as many of the nights you stay in Uzbekistan as possible to avoid potential issues on exit. Issued by accommodation providers, on check in your passport is returned with a slip paper clipped in. So its no hassle, just extra crap to carry (and to lose).

We found some backstreets we hadn’t been down and found a photo gallery and another mosque and another madrassa. We also found a school, complete with gas pipes running into the building overground as is common everywhere. When we had done exploring it was time for a long tea stop. Uzbekistan is all too easy and we are pretty relaxed. So our thoughts have shifted to Iran- not only will it be much harder but we haven’t really got a plan for it yet. We hung out in the sun and did some much needed reading. When it came time to go we managed to get a taxi easily.

A super modern high speed train had us in Samarkand in less than 2 hrs. On the way we passed large fields, some industry, young boys fishing in streams, shepherds herding flocks of sheep on the backs of donkeys and vast open steppe. For the first time there were rolling hills on the horizon.

When we got off the train there were very few taxi touts, we still declined the first guy as he wouldn’t shift from his asking price of 20,000 som. The next wanted the same but eventually we agreed on 12,000. He didn’t know where the hotel was that we were aiming for but confident he knew roughly where we were going we headed off. He seemed to be someone that makes extra money by doing taxi work and was a bit of a shifty character. The streets turned chaotic when we hit the old town. 2 way traffic was fighting each other on roads made for 1. We opted to bail and walk the rest, not that it was any quicker. 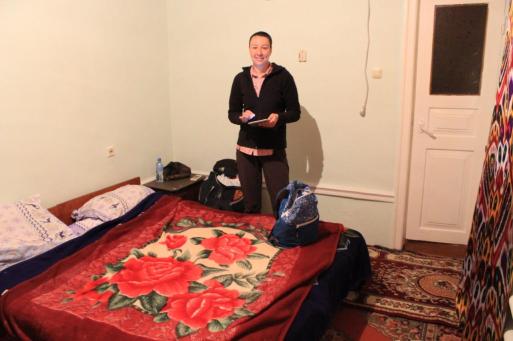 The first 2 B&Bs we tried were both closed for the low season but one told us to continue down the road to another. Eventually we popped out of a narrow street. In front of us was a big park and behind that we could see the back of the Registan buildings. The B&B was to the right. It’s cheap ($22 per night having negotiated down from $30) and it has plenty of character. The guidebook gave it an unflattering write up but given it was in it and open there were plenty of locals and tourists staying. With daylight fading fast we weren’t going to try and look for anything better. It opens onto a mini courtyard and a staircase led to 3 rooms (1 of which was ours). The main part was through another building which then opened out to a bigger courtyard and the bulk of the rooms were off that. Power and water are both patchy. The room was warm, it had blankets, a cavernous dilapidated tiled room for an ensuite and for the first time the 2 beds were put together. We booked in for 2 nights. We’ve stayed in worse and it’s in a good location and safe. Though we’d love to know what the pillows are stuffed with to make them as hard as concrete and lumpy.

We headed out to find food, heading through the park down wide lit boulevards to the Registan as we knew there would be restaurants nearby. The buildings of the Registan are massive and far bigger than anything else we have seen. It was all lit up and looking pretty but you had to pay to get close so we continued on. We walked past a couple of deserted restaurants but eventually found one with a bit of life so plumped for that.

Uzbek food is less than average and we’re over it. Plus the waitress tipped herself with our change – only about 30 cents but it’s the principle so we wouldn’t be going back. As we left we debated whether bread and jam for dinner could be preferable. Breakfast is ok and somsa are awesome for lunch (puff pastry parcels with either beef, chicken, lamb and onion or pumpkin) it’s just dinner that is rubbish.

Bukhara had spoilt us a bit. The old town is set out for tourists around a main square making it very pleasant and easy. Samarkand is a big city with things spread out, but what confused us most is that it had the most spectacular sights in Uzbekistan yet there were few tourists. Maybe we’d find them all in daylight. 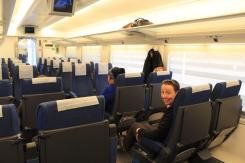 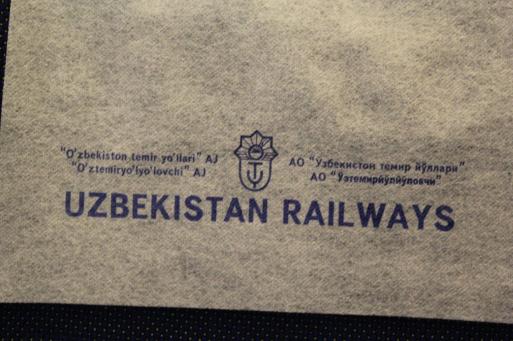