Nepal issues visas on arrival. After landing and filling out the visa form we joined the queue with every other foreign tourist. It took an hour, the slowest immigration queue by a long way. When you get to the front you pay your visa fee and get issued with 2 receipts, you stay in the queue and at the counter behind pass your passport, arrival card and visa stuff to the first guy in a row of three. He does what he needs to, then passes it to the next guy who does what he needs to and passes it to the third guy. The third guy hands your passport back with the visa sticker in it and finally the job is done.

We changed a bit of money and went to the pre-paid taxi counter, telling them the guesthouse we’d picked to head to. We were taken outside to the pre-paid rank, our taxi was a bashed up battered old car. One of the guys from the taxi counter got in too. As we made our way through the chaotic narrow streets the ‘extra’ guy asked us if we smoked hashish and told us that the guesthouse we had a ‘reservation’ for would not be comfortable for us as it only had shared bathrooms (we knew this was rubbish). He of course had a leaflet for an alternative. We were very cool about it and just said no thanks and that if we didn’t like ‘our’ guesthouse we’d just move tomorrow. To our surprise he accepted that and didn’t push it, we were thinking, wow! That was easy!

The ‘extra’ guy got out part way. We weren’t sure if he was just catching a lift into town or whether we was just trying his luck and knowing he wasn’t going to get anywhere with us had got out. The taxi dropped us where we wanted to go and tried for a tip again to our surprise when we said ‘nah’ he didn’t push it.

Thamel is the budget accommodation area but fearing it would be as hot and chaotic as Delhi’s Main Bazaar the guesthouse we’d picked to head to was on the outskirts of the area. There were a few guesthouses listed in the guidebook near to it so we knew there’d be plenty to choose from. We were real happy when we got out of the taxi. It was an elevated quiet dead end narrow lane. Better yet it was a great temperature and not too humid. Marie got dumped in the corner of a guesthouse garden while Emma did the rounds to find the nicest and best value room. She took her time as we planned to stay in Kathmandu for all of our 6 nights in Nepal and getting it right would mean we wouldn’t have to move. She was on the hunt for the last time.

We landed a clean room and bathroom with a stool, chair and desk, coat stand and cupboard, most rooms at that price ($16NZD) were similar but what swung it was the window with fly screens and our own private balcony. The guesthouse had a reasonably priced garden restaurant too as a bonus. We also got towels which we love as when you have to use your own it means the day you come to leave you have to pack a wet towel.

We settled in and got ourselves organised. Some clothes won’t be making the trip home with us like Marie’s NZ$7 Mongolian shorts, which while they have served her well on close inspection look  homemade e.g the stitching on the pockets don’t match (we forgot when we wrote the last Mongolia blog that we did leave with more than a piece of rope, Marie bought the shorts and a new cap to replace the one that the wind stole at the Flaming Cliffs). We also made a big list of things we need to do in Kathmandu to both see us through our time here and also to prepare for heading home. 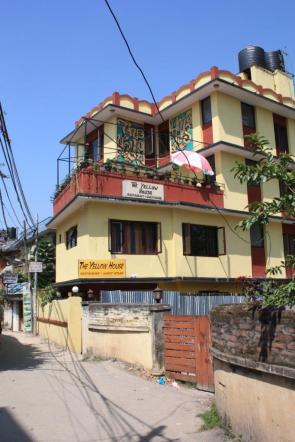 he next day we put the laundry in. Usefully there is a laundry place next to the guesthouse. Emma cut Marie’s hair with the first aid kit scissors. After breakfast we headed out to explore Thamel. The streets are narrow, dusty and polluted and busy but we loved wandering around the streets. The climate was perfect and harassment was minimal, just taxi drivers and rickshaws touting for business and none were persistent. It was fantastic. We said we’d enjoy India more if the heat, humidity and hassle were all cranked down 2 notches. Well, we’ve got it!

Emma bought a new t-shirt since she was down to only 1 (that’s because unlike Marie she was too tight to buy others on the way) which unlike Marie’s Delhi t-shirt (that got binned when we returned to Delhi) this one didn’t loose it’s shape or pour colour everywhere the first time it got washed. She also finally bought a new daysack, a fake North Face one. She had been using the bag that Marie took to South America so it started out half dead and soon got filthy, developed a small hole and lost it’s waterproofing. She’d started looking to replace it in Kuala Lumpur but a combination of being indecisive and too tight to cough up the dosh saw her make do, until the final week…

Within 10 minutes of being out and about we’d found everything we needed – a money changer close to the guesthouse with good rates, internet, a barber shop and shops selling everything on our list.

Late afternoon we went to an internet cafe to make a start on catching up with the blog and after we went to the barber shop to get Emma a haircut. We’d stopped on the way to get a black tea and asked one of the guys there how much it should cost. Just as well we’d asked as when Emma asked the barber the price his response was ‘how much do you want to pay?’ ’60 rupees’ (the price we had been told). ‘ok’ he said. 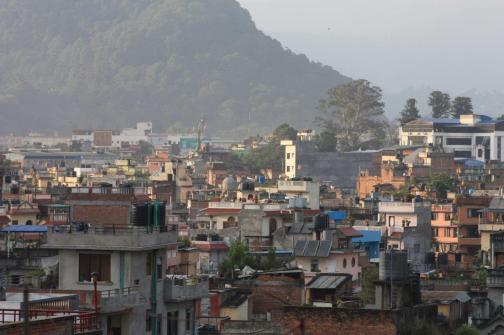 Marie watched a young boy getting a haircut with what looked like large fabric shears and decided the first aid kit scissors she’d had that morning were probably the better option. Emma got the guy with one eye. Cut done he started to give her a head massage, she stopped him pretty quick, knowing this trick. He still asked for 120 rupees because of the 2 second massage but Emma said ‘no we agreed 60 and I didn’t ask for that’. He didn’t argue (they would have in India). Talking to a guy at the hotel later he said people just try their luck. We headed back to the guesthouse before it got dark (it’s dark at 6pm), collecting our laundry on the way. Dinner and post-dinner blog writing was done by candlelight as there was one of Kathmandu’s frequent power cuts. The power is off here for up to 10 hours a day.

We’d ticked a lot of things off our list on day 1 but we were still a long long way behind with the blog and we want it to be finished when we depart. We always knew that a good chunk of our time here in Kathmandu, being the last week, would be spent sorting things and getting organised for the return to ‘normal’ life. Rather than keep losing big chunks of each day trying to catch up we decided to do a big push to get on top of things so basically spent the day writing, typing, sorting and uploading photos. We have tried to spread out the publishing of entries as much as possible but sorry for the Bhutan tsunami of entries. It was good to do, it needed to be done but it still felt somewhat like a wasted day.