Flight 16 must be one of the most spectacular in the world. Both of our routes to and from Bhutan flew directly over the Himalayas. Unfortunately when we flew from Delhi the cloud was too high to see anything. On our way out to Kathmandu we got lucky…

This time as we took off from Paro we were able to see the plane weaving between the mountains and how close we got to them. As we rose above the clouds we settled in for the 2 hour flight (and stole the in-flight magazine because it has to be the coolest in-flight magazine ever). Shortly after we’d been fed a snack box we could see mountain tops through the windows on the other side – we realised we’d got seats on the wrong side to see the big peaks. We also realised that a tour group had managed to get every window seat on the good side. Luckily for us it wasn’t a full flight so they’d been sat in 1’s and 2’s. As the captain started to point out the biggest peaks we piled across. The old woman sitting there didn’t mind, good job as there was no way we were missing out. The woman Marie sat next to was just in awe and was kind enough to move so Marie could get some photos. 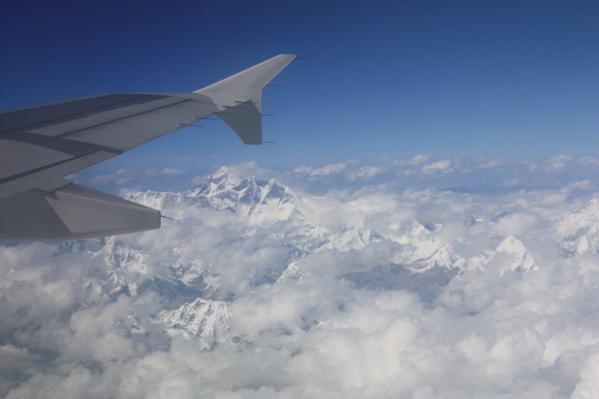 We’d expected to just see Mt Everest’s peak in the distance, but in fact we flew right next to it. We couldn’t have asked for a better fly-by.

It was awesome. Of course we could also see the other 8,000m+ peaks such as Makala and Lhotse but we were mesmerised by Everest being the highest mountain on earth and all that.