After visiting the Taj, breakfasting and showering, we took a slow 1:30hr drive 40km west down the road to Fatehpur Sikri, which was once a fortified city (between 1571 and 1585) until the water ran out. The whole of the palace and pavilions are made of red sandstone and it was really peaceful. There is a ‘green bus’ that takes you there from the carpark for 5 rupees which is another pollution control measure. There are much less people visiting here even though it is a world heritage sight. We hopped in and out of the shade and enjoyed looking at the carvings that remain intact and the scale of the place although it’s hard to imagine what it would have been like as a city.

We did get a taste of of how life might have been as we entered the mosque courtyard where there is a white marble tomb that floats in the centre of a large red courtyard which contains a number of tombs of the Shaikh who predicted the birth of an heir to the mugal throne which prompted the emperor to build the city. The entrance is littered with shoe attendants, mirrored pen sellers and lots of children either just plainly wanting money or selling mosaic decorated pens, postcards, photos opportunities or elephants on a string. Some ask for NZ coins and others ask for the ticket you just bought for the Palace so they can sell them on. There are persistent sellers here and most are children. Emma seemed to provide the most entertainment to them and Marie managed to score some photos just with the continual questioning of ‘do you want a guide’ and ‘I give you good price’ it limited our ability to slowly look around and take it in and talk about what we were seeing. Emma managed to get rid of the two little boys by telling them to go off and harass some other tourists pointing to some Indian guys and saying they might buy something – which they promptly did. Marie got rid of the boy cartwheeling and monkeying about to have his photo taken by telling him point blank that she wasn’t going to take his photo. For kids some of them really have the gift of the gab and they have a whole speil just on cricket.

We really enjoyed visiting. We jumped back into a very hot car to continue the journey on. The drive was hot and we both ended up having a brief snooze before the halfway mark to Jaipur where we stopped at a tourist restaurant for the driver to eat. We sat outside drank our bottled water and ate the digestive biscuits we had stocked up on in Delhi. Emma did investigate the tea prices but at ‘only 70 rupees’ you can imagine her reaction. We arrived in Jaipur in the late afternoon ready for air con.

The road to Jaipur was good and also very quiet (for India) but the journey still took forever due to the speed limit. The countryside and towns we passed through were really cool. We saw heaps of water buffalo and almost as soon as we crossed the state boundary into Rajastan we started seeing lots of camels hauling carts.

The aircon is still no match for the sun so we weren’t sorry to arrive at the hotel in Jaipur in the late afternoon. The hotel was by far and away the nicest place we have stayed in this trip, a heritage hotel decorated in a traditional style, full of antiques. It even had a swimming pool. We were there for 2 nights and were upgraded ‘for free’ to the Maharaja Suite. It was good to be able to see where some of the cost of the tour had gone. The restaurant prices were extortionate but they had free internet/computers in the business centre with super fast connections and 2 USB ports for backing up photos. We didn’t find another restaurant nearby but after making full use of the freebie to sort out, back up and upload photos we figured that had offset some of the cost a little and the food and the service were very good.

After settling in and freshening up we had headed out for a walk to explore the area and to get a few supplies (no way were we paying the hotel prices for water when the shop is 5 times cheaper). We found a street with lots of convenience type shops and did some very successful shopping (in our world a mini-bar just equates to a fridge, an exciting thing to have in a hot climate). As usual we got touted by some autorickshaw drivers. We have no problem being asked if we need one/might need one in the future, after all that’s how they make a living, it is when they won’t listen to your answer that it gets annoying. 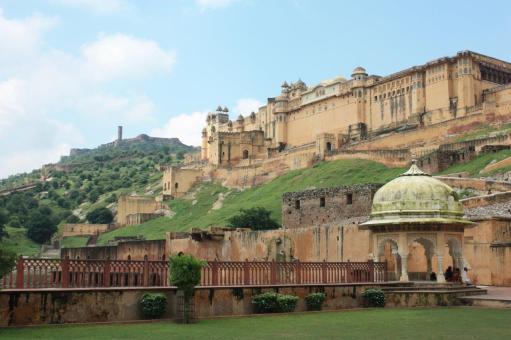 We were approached by a young guy in an autorickshaw while out shopping who had his friend in the back. He said he just wanted to talk to us as he liked talking to people from different places (yes, yes that’s what they all say) and he had to keep talking to people to practice his English (the other oldest softening you up line there is). His English was fantastic and he was different in that he actually listened to our answers – long story short after a rather long time talking to him and much banter we believe he is just a genuinely social guy. The only thing he really offered us was to go and visit his guru who within 10 minutes would know more about us than we know ourselves. An intriguing offer but we genuinely were too knackered so saying we were too tired was not a flimsy excuse.

Words can’t really explain the interaction we had with him and his mate so we’re not going to try, but out of the blue he said something very cool to us. We never tell people with any form of business that we have been anywhere before or we are going anywhere after, we are on holiday for whatever the amount of time we are in that country otherwise they just think you’re loaded. We hadn’t mentioned previous trips, holidays or any reference to other countries at all. He suddenly turned to us and said ‘you are travellers not tourists, I know this because you have spent over 10 minutes standing on the street talking to me. A tourist would not do that.’ We knew exactly what he meant. He didn’t mean he knew we were travelling or that we have travelled. He meant it in a behavioural sense.

There are lots of difference expressions to describe the difference between a ‘tourist’ and a ‘traveller’ but basically a tourist will shuffle to and from their hotel just to see the sights and will only see what they want to see, but a traveller is open to much much more. We knew he was right, a tourist would have had minimal interaction and just kept on walking.

The next day we did the standard Jaipur tourist circuit. We started the day at Amber Fort. The tourist thing to do is ride an elephant up to the Fort and this is included in almost every package. So that is what we did. Guys near the top take your photo and then have them printed and ready to sell to you when you leave. We bought ours, the price started at 1000 rupees for all 5, we made the seller walk almost all the way down the hill to negotiate before paying 250. We figured he’d still be making a good profit at that and after all who else wants a picture of us on an elephant?

Amber Fort is a Fort/Palace built from pale yellow and red sandstone and white marble, with construction starting 1592. It was a very cool place, lots of hidden alleys and staircases to explore. There were a few too many tourists for our liking (because the elephant rides can only be done first thing in the morning) but it was still possible to escape most people.

On the way back into town our driver helpfully took us to a fabric shop where they did block painting. Government approved drivers aren’t allowed to do any of the shop commission funny business so he took us just for our ‘information’ to a government approved fabric store. We had a block printing demonstration and were shown around the shop to look around ‘no pressure’ (which there wasn’t). 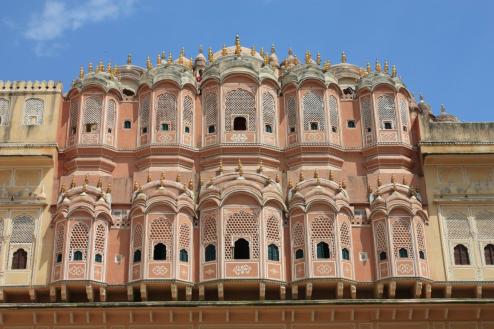 As it happened they did have something we wanted and we got the price down to what we thought was reasonable and Emma also persuaded him to let us have the printing demo fabric as a souvenir. Next we got taken to a gem store ‘just for our information’ even though when this was first mentioned we had very clearly said we had no interest in going there. We weren’t impressed and the shop guy was pushy and was a bit pissed off when we were very adamant we were not interested in buying anything whatsoever, even his ‘world bargain’ tacky cheap rings that looked fake. It may have had something to do with how having been here a while we gave very blunt answers.

Next stop was the city palace which is a blend of Rajasthani and Mugal architecture. It was quite peaceful, we visited the museum which houses royal costumes and shawls, the armoury, the Hall of Private Audience where the Maharajas would consult with their ministers and where two huge silver vessels are displayed (the largest silver objects in the world), the Welcome Palace and the inner courtyard where 4 decorative gates represent the seasons.

After we walked to Jantar Mantar, an observatory begun by Jai Singh in 1928. He built 5 in total and Jaipur, the largest and best preserved, it is a world heritage sight. The instruments he built are very clever and each has a different purpose eg. measuring the positions of the starts, altitude etc. Unfortunately it was early afternoon and the sun was scorching hot and there was barely an inch of shade so we didn’t stay and learn as much about each instrument as we would have liked. However, our final stop, Hawa Mahal (Palace of the Winds) did deliver a nice cool breeze. Constructed by a Maharaja in 1799 to enable the royal ladies to watch city processions it rises 5 stories high. Delicately made from pink sandstone it is fairytale stuff.

After our 6 hours of sightseeing we’d had enough and headed back to the hotel. We splashed out at dinner time and didn’t order the cheapest thing on the menu. 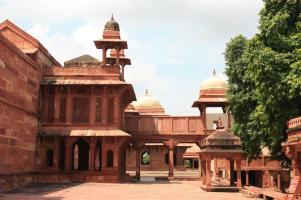 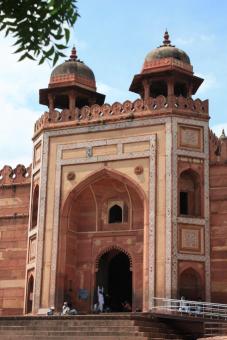 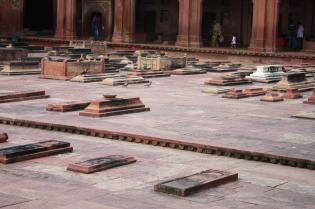 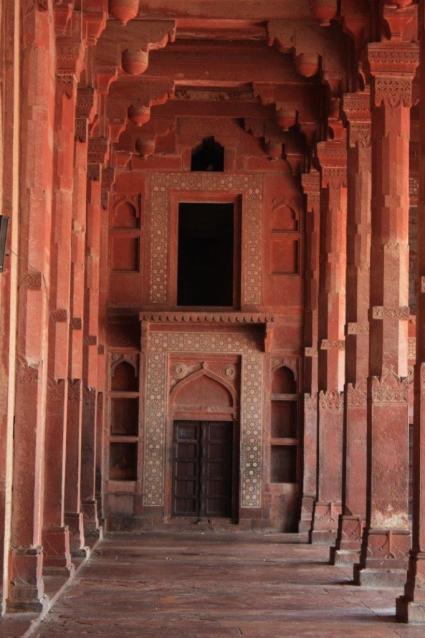 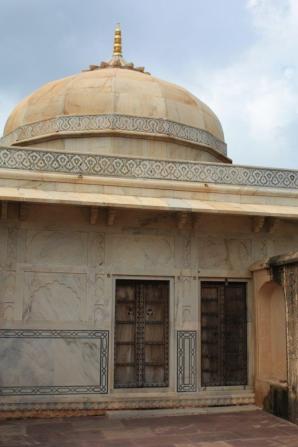 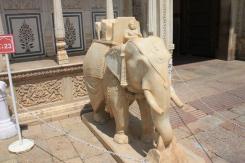 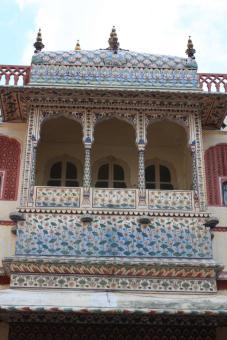 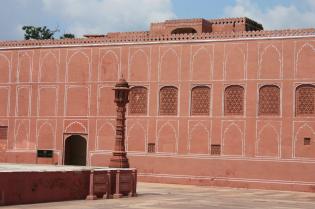 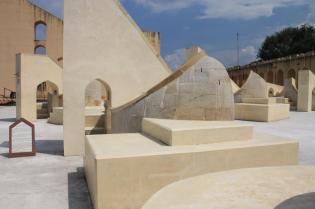 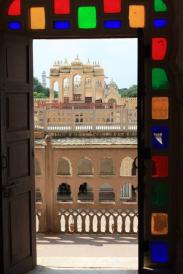 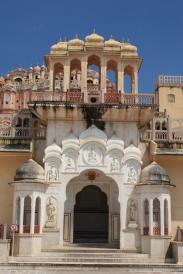