After a good breakfast of banana bread and tea at the guesthouse we headed back to our beach house to pack up and prepare for the wait for a mikrolet back up the hill. We were told they run on the hour first thing in the morning and we were expecting to wait until 9am but no sooner had we packed up one than arrived

We headed back up the hill to Baucau bus terminal to get a bus back west to a place called Manatuto. Before our mikrolet had even arrived at the terminal the touts had jumped on asking if we were going to Dili. We negotiated our way onto the bus that looked most likely to leave first and got some good seats with legroom on the back seat, with the window open and no loud music and tinted windows you can actually see through, so we enjoyed watching the scenery go by, passing villages and rice paddies.

Manatuto is halfway between Baucau and Dili and we got dropped just west of the cathedral, the boys threw our rucksacks off the roof and we headed down the main street to see if we could find somewhere to stay. We scored a couple of rooms in the local nunnery. Amazingly the convent had good internet (that’s how we managed to get a few photos up on the Dili blog entry). It was really hot so we had a slow afternoon.

We left Victor on the internet at late afternoon and went for a walk along the waterfront. We took a break from the heat under the shade of a tree and 5 girls walking home from school descended on us. They were curious and cheeky enough to join us. We spent a long time going through the usual what is your name, where are you from, how old are you etc. There is always 1 that is quite cheeky and its usually the ring leader. They went into huddles to decide what to ask us next.

Eventually they got bored and carried on their journey home, so we could carry on with ours. We hadn’t gone much further when a young guy sat studying on the sea wall said hello to us and asked where we were from, so we stopped for a chat. Turns out he was a student studying English and he was sat on the wall doing his homework, which was about electricity generation, including solar and nuclear fission, in great detail! We were pretty gobsmacked at how technical it was.

Our new friend said that he talks to everyone he can so he can practice his English. After 15 or so minutes covering the usual stuff and posing for some photos for him, he asked if we wanted to go to the market. Of course we did. It wasn’t far, just down the road and essentially we just wandered road the slightly unimpressive market teaching him new words ‘limes’ ‘goat’ ‘corn’ and us asking him what the different veggies are that we didn’t recognise. We bought some mandarins and were a tourist attraction for the stall holders. 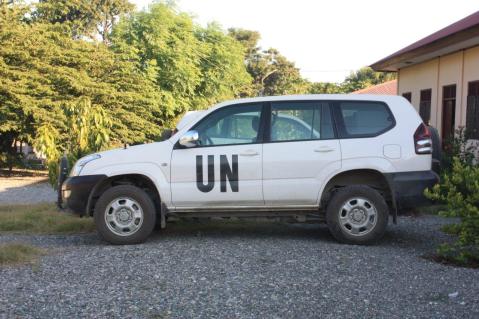 Like everywhere we’ve been in East Timor they seemed pleased to see us and would look at us and talk amongst themselves. We asked our new friend what they were saying and he said that they were pleased he had taken us there. The people genuinely do want tourists here, there just aren’t many of us – yet, there will be once word gets out how stunning it is and how friendly the people are. 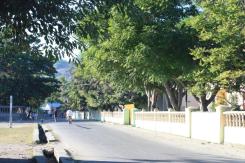