We said goodbye to the Andes via a 2 hour true winding mountain road through spectacular scenery – huge steep mountains dropping down into a deep gorge. With every metre we descended the temperature rose until eventually we were in hot, dry Barinas. We did the rounds of bus companies for the last time, looking for ones that go overnight to Caracas and secured our tickets for our last South American bus.

With over 12 hours to kill we found somewhere to dump off our big rucksacks and caught a local bus into the town centre where we spent the rest of the working day in banks trying (unsuccessfully) to get some money before we ran out completely. We returned to the bus terminal pretty frustrated, particularly after trying to buy some food on Visa, when we discovered that not only do all ATMs in Venezuela not take any foreign cards but you can’t even buy services on Visa. With that discovery, out of the window went our plan B, e.g. if necessary check into a posh hotel in Caracas that takes Visa and provides airport transport, so that would only leave us having to find cash for the departure tax. 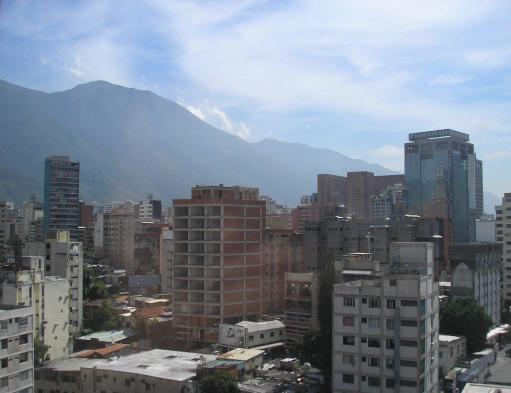 We parked ourselves outside the terminal pondering our money situation until it went dark, after discovering how hot it was in the waiting area, we’d taken camp outside the police office next to the hot dog stand where they all hang out (too hot in the office).

We passed the hours away watching the comings and goings of the buses and police. This got really interesting when the whole terminal had a black out, we were quite glad to be next to the police as it lasted almost 2 hours and inside the terminal was pitch black – so there must have been easier targets for any baddies around than us. There were certainly plenty of richer ones! We also had a good chat to some of the police (they don’t see any gringos in Barinas) before duty called in the form of a crying woman saying that someone had just been assaulted, at which point they got all serious and marched off after sending one of the juniors back to fetch the big gun and what looked like a plank of wood, which presumably is what they use to hit people with (we couldn’t understand the big gun since they’re all armed anyway…).

We finished the trip as we started – on the top deck of a double decker night bus. We knew we had lucked out when we saw the people behind us take up their seats. The guy was massive both height-wise and width-wise and both of us instantly thought he’s a snorer. Sure enough he slept well while the rest of us on the top deck were kept awake by his chronic snoring. Luckily we’d both fallen asleep before he did, so we got some sleep, but once awake in the early hours it was like torture and we found ourselves hoping he’d choke in his sleep. Ironically he woke up about 5:30am and we both fell fast asleep only to be woken as we pulled into the bus terminal 45 minutes later…

With our seriously limited funds we caught a cab to where we wanted to stay (people outside Caracas had told us not to take the metro as we’d get robbed). Anyway, we found a nice official cabbie who got us and our possessions there in one piece – not that there was any point of taking us on a millionaire’s tour anyway since we couldn’t withdraw any money (and we made sure he knew it!). We also did a deal and arranged for him to take us to the airport the next day and we quizzed him about how unsafe Caracas really is since Caracas being ‘muy peligroso’ has been a common topic of conversation in Venezuela. Its rubbish he said it’s nowhere near as bad as people say, its just a big capital city and has a level of crime to match.

He dropped us off where we’d asked to go to and pointed out the cheapest hotel on the street to us, (we looked around, he was right). We tried to check in but they required payment up front and weren’t budging even when we offered everything we had left (about half the cost of the room) and the rest in US cash which they could hold till we’d got Bolivares when the banks opened. They did however let us leave our big rucksacks there while we went and got money, which was a help as we’re not sure a bank would even let us in the door with them.

So it was 7:15am and we were homeless and close to being penniless, but there was plenty of people around starting their day and it was a nice warm sunny morning. So we did the only thing we could, got a coffee from McDonalds (really only to use the McLoo but as it had only just opened we thought it too cheeky to not buy anything) and took up camp outside the bank – the first in the queue that started about 8am. We had a good long chat to another man in the queue about how Caracas is not that dangerous anymore, our money situation etc etc…

When the doors opened and we got to see someone we found out that they didn’t do cash advances either, so we went down the road and tried the next place (same bank as gave us an advance in Merida, but that apparently couldn’t in Barinas). We didn’t get our hopes up – we had to mentally prepare for our last day to be spent going from one bank to another desperately trying to get enough cash to catch the plane – but miraculously they could do it, our relief was palpable, and it was only 9:15am.

We joyously skipped back to the hotel, paid the man and checked in.

After much needed showers we put our dirty clothes back on (saving our clean set for the flight home) and spent our last day doing some relaxed window shopping since we were staying in the shopping area.