To get to Quito we took a 2 1/2 hr bus to Manta up the coast from Puerto Lopez and pretty much got straight onto an 8 hour bus to Santa Domingo. It was a long trip (particularly with no toilet or toilet stop!) but some of the scenery was great with jagged lumpy hills – the local transport in that area was horseback. Once we finally arrived in Santa Domingo we found there was a whole load of hotels near to the bus terminal so we literally rolled over the road and scored our cheapest sleep in Ecuador yet – $10US for an ensuite. We dumped the bags and then rolled next door to a Chinese restaurant. 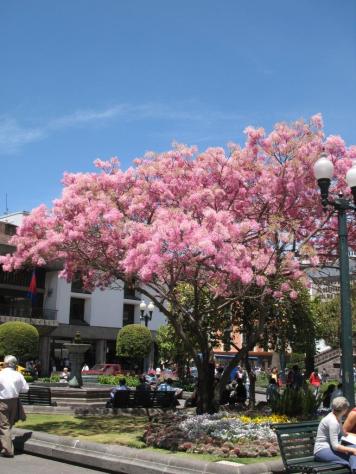 The next morning we were up early (not quite as early as we thought as we knew the alarm clock’s batteries were dying but it lost an hour in the night), wandered over to the station and got straight onto a 3 hour bus to Quito.

Quito’s Old Town proved to be one of the more difficult places to find somewhere to sleep, because there aren’t that many and some you hardly notice, because they barely have a sign. But we had a nice walk round the Old Town and still found a nice, reasonably priced place within an hour. In the afternoon we caught the Ecovia (one of Quito’s 3 lines on like an overland bendy bus metro with designated lanes and stations), to the New Town to hunt for a similar camera to our damaged one, but no luck. We visited the post office and sent some of our thermals and other bits home because we have no room in our rucksacks and are sick of lugging them around. Whilst in there a huge thunder storm started and it poured down. People under the same doorway as us said that storms, and even rain, are rare in Quito. Under the second doorway farther down the street 2 guys (one who grew up in California so speaks English and one who lived for 4 months in NZ and is now applying for residency, but didn’t seem to understand basic English) gave us their phone number and told us to call them for a drink. Needless to say we didn’t bother. 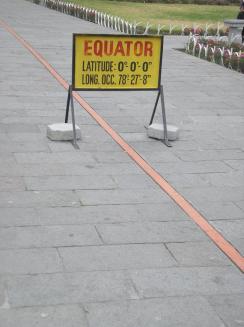 The next day we got up early and caught the Trole (another metro line) before hiking up a great big hill in a posh suburb to try and find the Venezuelan embassy. We eventually found where their website says it should be but we asked a guy polishing a car nearby and its moved, luckily he knew where to – not far from where we’d been the day before, which was a tad annoying – so we walked part way down the hill and flagged a taxi. After a bit more asking around we found the embassy. Everything we’ve read says that if you fly in to Venezuela they give you a free tourist card, but to enter overland you need to get a visa in advance. But they told us that we don’t need a visa and that at the border we’ll be given a free tourist card. Hmmm, we’re not convinced so we’ll have to make a trip to the embassy when we’re in Bogota too.

We hopped back on the Trole, then onto the Metroline where they met and finally onto a bus to go to Mitad del Mundo (middle of the world). It was a strange place, with a globe topped monument and the supposed line surrounded by a heap of restaurants and artesians shops, like some kind of poor attempt at a theme park. The French astronomers who worked out that this is the equator have been proved wrong by GPS and the monument is actually 240m off the equator (funnily enough they don’t tell you this when you pay your entrance fee!). The real equator is marked by a monument made by the ancients on top of a hill, they got right what the French didn’t. Afterwards we went to a museum 2 minutes down the road where a guy boggled our brains by telling us how the world is actually on its side so all of our world maps are wrong and are only set out that way for political reasons (Europeans putting themselves on the top). The map of the world correctly is sideways with NZ on top…

We flagged a bus back to Quito, but made a detour, jumping off where we’d spied a shopping centre on the way. Had no luck finding a camera there but we did find a pick n mix! Next we made our way across town on the Metroline, then flagged a bus going in the right direction (uphill) and topped it off with a walk along a motorway to get to Quito’s cable car, the TeleferiQo. It takes you up to 4100m and we were lucky enough to get there in time to admire the view before clouds rolled in. On the way back we called into the funfair at the bottom and found a go kart track – something we’ve been meaning to do for ages. A perfect end to the day!

Next stop the northern highlands before heading to the border. 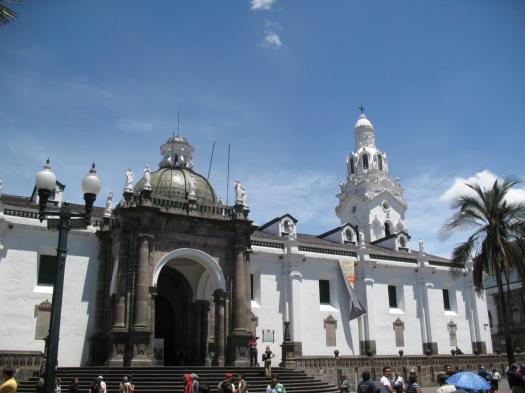 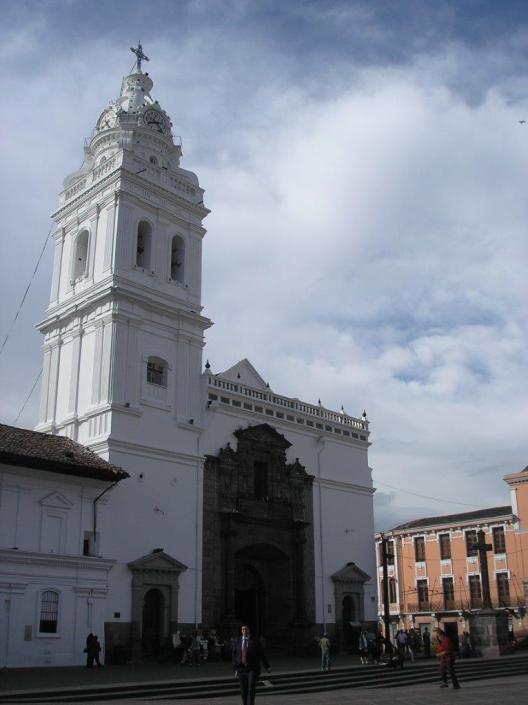