The bus journey from Arequipa to Cuzco doubled back on much of that we had travelled through getting to Arequipa from Puno so we did the journey in one 10 hour stint overnight.

Amazingly the bus got in an hour early – at 5am, so after ignoring the accommodation touts (if you didn’t like the place they took you to what are you going to do at 5am in the morning when its dark and you’re in a strange city) we hung out in the station with a mass of locals until it got light. We then caught a taxi to the place that Adam stayed 2 years ago as it’s in a great location. They had a free room at a fair price so we checked in, and it wasn’t even 7am! 10 minutes later we had a knock at the door and they’d made us coca tea (its vile but that’s besides the point!). The shock for us on arrival in Cuzco is that it is actually CLOUDY. After so much clear blue sky it felt kind of claustrophobic but by 9am it had lifted – turns out this is what happens practically every morning.

We spent the day wandering round exploring the city and its cobblestone streets. Every corner presents a photo opportunity but with so many bars, restaurants etc it kills the olde worlde atmosphere a little. We ran into a huge gathering of small children, teachers and parents. They were celebrating the 1 year birthday of PRONEI which provides first/early education. There was a parade through the main square with cute little children dressed up, lots of balloons and a terrible under rehearsed band but colourful all the same.

Whilst taking one of our many walks from chilling in the plaza we found an Irish pub for lunch that does massive tasty meals so were well fed before heading off to explore some more and sussing out how much it was going to cost to get to Lima. We asked a couple of the in-town travel/tour agents and they were quoting around 150 Soles for an overnight 19-24 hr bus. We made sure we got as much info from them as possible e.g companies, times, journey length etc and armed with this information caught a taxi to the bus terminal and sure enough we could get a ticket for much cheaper direct for the company’s office. The 6 Soles round trip that took 30 minutes saved us 60 Soles. Since we were booking a few days in advance (because of heading out of Cuzco to Machu Picchu) we were also cheeky and asked for, and got, our favourite seats, upstairs at the front kerbside. We knew that with the 19 hour journey we would have lots of daylight to take in more scenery. We felt pretty smug.

Whilst looking at the calendar that afternoon Marie realised that our first day in Cuzco also marks the halfway point of our trip, so its all downhill from here! Very sad as we know that time will really fly by now.

The following morning we were up early once again to catch the train to Aguas Calientes and 3 days later made our way back through the Sacred Valley. We checked back into the same hostel and for the rest of our time in Cuzco just chilled out, watched some form of passing out parade followed by another parade that marks the start of a festival in Cuzco – in true Peruvian style it involved carrying a ‘Mary’ through the streets and decided that we really like the place despite its excellent presentation being purely the result of tourist interest. 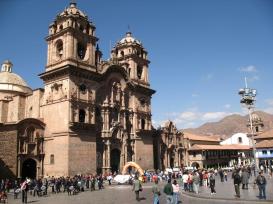 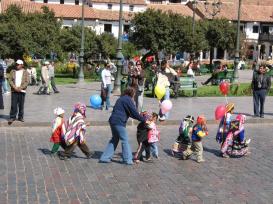 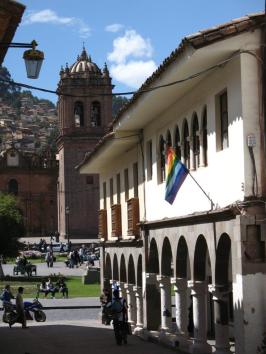