Before leaving NZ we’d found a driver to take us on a 5 day loop trip into the mountains. Being short on time we’d quickly realised we wouldn’t be able to fit in as much as we wanted if we went by public transport.

Our first destination was Banaue in the heart of the region that is home to the Philippines infamous rice terraces. Its a 9-10 hour drive, so our driver had asked if we would be ok to leave at 4am to miss Manila’s traffic gridlock.

Thankfully our bodies are still partly on NZ time and while we hadn’t got to bed any near as early as we should getting up at 3:30am didn’t feel too bad.

We were surprised at how much life there was when we left, Manila clearly doesn’t sleep. Even the 7Eleven and the tea shop were open and there was still plenty of traffic on the streets until we reached the city outskirts. Alfredo, our driver, had the radio on and we giggled in the back as we departed to the soundtrack of YMCA.

After a quick stop in the dark we were out in the countryside when the sun rose 2 hours later. The silhouette of a volcano appeared as the sky became a brilliant blue orange and yellow and reflected in the rice paddies to our side.

Any ideas about getting some extra sleep disappeared at that point as we left the main highway and began passing through small towns and villages. We love travelling in the early morning and see places awaken.

At 7:30am Alfredo pulled over at a roadside restaurant. It was a buffet offering so together we lifted the lids off the multiple pots and chose what we wanted. Emma and I opted for a lentil based dish and a beef based one (we picked out the oxtails, we couldn’t contemplate them for breakfast) to accompany our rice and copied our driver in getting a side of spring rolls. We were also given soup, which was tasty on the first mouthful but like many foods in the Philippines very salty on the next. Overall the meal was good and our cheapest meal yet at just over NZ$5.

The journey took us 9 hours. When we hit the hills we started the bends, which we initially took at high speed overtaking anything going slower in our way, until the roads really started to wind.

The perfect blue sunny sky disappeared and was replaced with low cloud and the occasional patch of drizzle. We stopped a couple more times for quick breaks. We were thankful that the bends were broken up by some flat through a town as we were ready for the break. We both dozed a little as tiredness beat FOMO.

We arrived in Banaue at 1pm. The guesthouse we’d booked was high on the hill side on the outskirts of town. It was really quiet, so much for the peak season we’d been warned about, we were the only guests.

The balcony had great views of the rice terraces opposite, part of the reason we’d picked it as these are what we’d come to see; the rice terraces of the Cordilleras are designated a UNESCO world heritage site, so old they can be traced as far back as 2,000 years.

The temperature had dropped significantly to the low 20sC and the cloud was low. As we settled into our room it started to drizzle. We put waterproofs on and headed out to walk down into town. As well as checking it out we wanted to head to the tourist information office to arrange a trip to Batad the next morning. A mountain village 18km away accessible by foot from the road end and home to rice terraces that are considered to be the most impressive.

We took our time walking down, the steep roads while paved were really slippy in the wet. At the bottom we found the tourist information office easily and in less than 5 minutes we’d got a tuk-tuk driver arranged to pick us up at 8:30am the next morning. The drizzle had got heavier so we rolled across the road to a store to stock up on a few provisions and then into the cafe next door for an early dinner (lunch had been skipped). We took a seat on the balcony overlooking the road and took it slowly watching the town’s life go by.

Afterwards we walked down into the centre of the town and found where everyone was, it was heaving with shops, people and transport. We had a brief wander round but with the light going and the drizzle set in for the day we decided to head back to our digs. What followed was one of the most thrilling tuk-tuk rides ever, they have to rev the hell out of the engines to get up the steep hills (so you hear them coming long before you see them) and we went whizzing up the hill with some serious revving in the rain squashed onto the tiny seat. A happy young driver he even gave us doorstep delivery under the cover of the porch.

The karaoke bar below our room started at 7:30pm, we couldn’t imagine who was there apart from the family that owned our place. We were reassured by signs that asked for the noise to be kept low after 9pm. Not that it actually mattered to us, we were tucked up and fast asleep come 8pm even with the karaoke.

Filipinos are punctual. Our rickshaw driver to Batad moreso, he was 25 minutes early. We breakfasted on the terrace looking across to the rice terraces; egg, toast, Emma had Spam (which was incredibly salty) and milo. As soon as we were done we hit the road.

There was a little more room in the sidecar, which we were pretty chuffed about given it was going to take an hour to go the 18km to the road end.

We stopped a couple of times en-route to photo some of the other rice terraces and after going up one very steep hill and half way back down the other side, we’d arrived. The sun had also arrived.

The walk to the village started as a rough rocky trail and then became a concrete path. It wove downhill sharply but before long we were in the village where the entrance fee booth and a food and drink stand is. It was much quieter than we expected, there was just one small group and one couple. Both had a guide and we quickly realised we should have got one too as the route to take wasn’t obvious.

We hung back at the village viewpoint until the couple moved off and followed them from a short distance. It turned out they weren’t doing the usual route, they were doing it backwards which meant they were going to the viewpoint on the other side of village first. This suited us perfectly as that is where we wanted to go to.

We would have been stuffed without a guide. The trail was just that, a bit of a path through jungle on the hillside with other paths coming off it. The couple went slowly given it wasn’t easy underfoot and took lots of photos, so we did the same.

Eventually it came out onto the rice terraces. The wall of one has been concreted to allow you to walk on it, it was narrow and the drop down reasonable. They took their time with photos and while we could now see the way to the viewpoint we were stuck behind them. We didn’t mind given we’d have been stuffed if we hadn’t followed them. They turned out to be really nice when we finally caught up with them at the viewpoint of he whole valley. It’s amazing to think they are built by hand. It reminded us of the terracing at Machu Picchu.

On the way back the clouds rolled in and the temperature eased, which was perfect, we had our photos and with a long drive ahead were now keen to get back and hit the road, we whizzed back along the trail and had a drink stop at the village entrance and then did some swearing on the way back up to meet our tuk-tuk.

The tuk-tuk had only just made it up the steep hill to get to the summit of the hill before the steep fall to the road end. We had wondered if we would make it out, but our driver had a plan and when we hit the really steep piece with a very tight bend he kicked us out to walk up it.

On the way back the driver detoured to another village to show us the rice terraces there. We hung out on the road wall for a while and soaked it in.

Once back at our digs we washed, changed into some clean clothes and hit the road to Sagada. 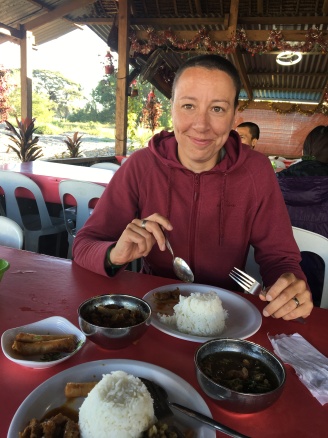 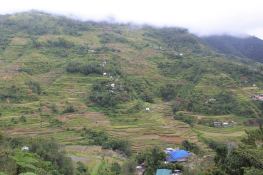 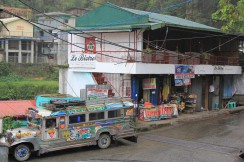 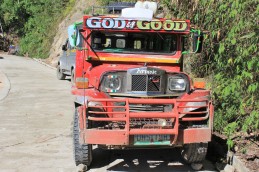 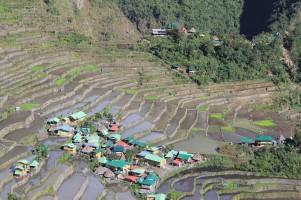 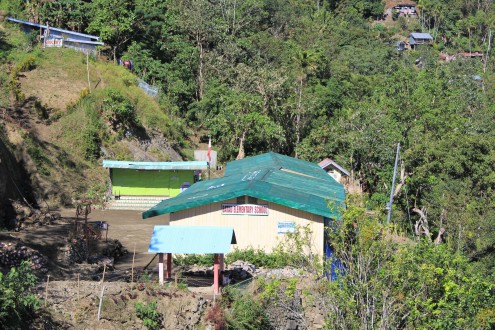 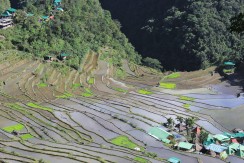 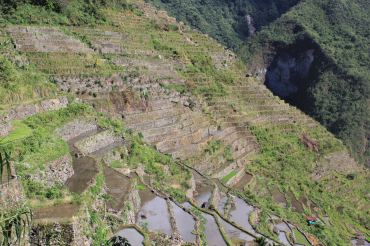 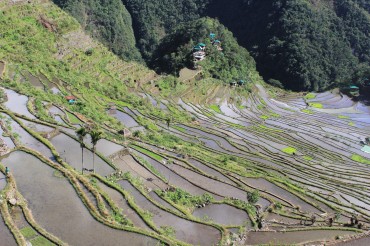 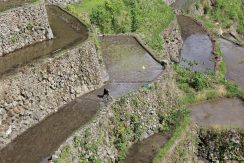 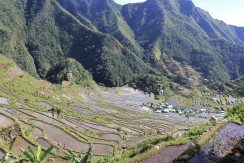 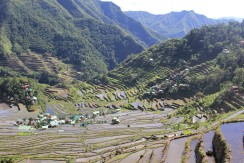 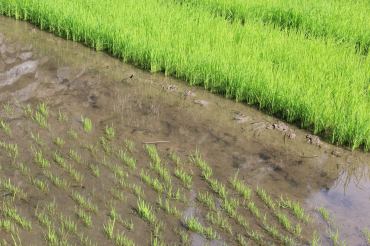 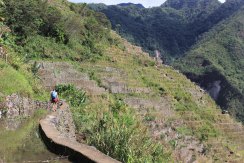 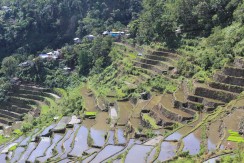 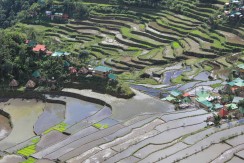 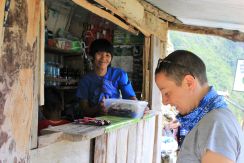 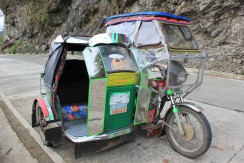