Sost is Pakistan’s border town, even though it is 84km from the actual border. We knew it is only a small place so hadn’t rushed up there, even thought we know morning is when the only public transport there is would have gone. Instead of plan was stay in Passu for the morning and then see what ride we could to find. Knowing that might take time we had decided we wanted to be hitting the road about mid-afternoon.

When the time came we checked out of our hotel and set ourselves up on the Highway just outside. More traffic was heading south than north though it was still barely a trickle. After half an hour maybe half a dozen vehicles had gone past which were either full or just going to the village. One car heading south had turned round and stopped. Two clearly affluent young men (well dressed, new car and blatantly with their driver) heading to Peshawar offered to take us to Sost. Peshawar is as far south as Islamabad and it would add 1.5 hrs onto their journey so while very grateful we insisted they didn’t do that (much to their driver’s relief), they settled instead on getting a selfie with us.

When a small flatbed van headed our way we knew we were in luck. When they stopped we checked they were heading to Sost and then jumped in the back with 2 other guys. A typical multi-purpose vehicle it had wooden boxes seating running down each side, and metal rails for sides. The guys got off in the Passu and we soon picked up a mother and son who had earlier walked past us, they were only going a few kilometers, then after that we picked up a middle-aged man who was also wanting a lift to Sost. There would be the 3 for the rest of the journey.

It didn’t take us long to realise we were in Pakistan – we can do whatever we want! We don’t need to stay seated. Marie stood up and held onto the rail looking out over the cab to the road ahead. After a bit of goading Emma joined. It was amazing. The mountains towered above us as we wound through gorges and we could see glaciers. We whizzed through small villages and people waved – both adults and kids.  We were both grinning from ear to ear and agreed there was no better way to finish our journey in Pakistan that hitchhiking in the back of a truck. The other passenger thought we were crazy. Here’s a short video of the journey

The driver was stoked when on arriving in Sost we gave him a couple of hundred rupees. He clearly wasn’t expecting anything.

We headed to a hotel that Rehman and the other guide we met had both recommended. They’d both said we’d get a good deal if we said they’d sent us. We landed the cheapest room we’ve had. Helped by us claiming we only had a limited amount of money left because we were leaving. Which was true, we just didn’t mention we wanted enough left to stock up on snacks too.

It was a tidy room and we had comfy chairs and a coffee table and a view of the mountains on the opposite side of the valley. We had 2 old fancy telephones as decor. Set back off the road we figured we should be in for a reasonably quiet night.

Sost is a one-street town, with shops on both sides and lots of psychedelic Pakistani trucks parked at the town entrance for goods flowing over the border. Our first task was to get our tickets for the bus that crosses the border to Tashkurgan (in China) before it closed. The bus office was 200m away at the end of the strip of shops. The tickets were an astronomical 3,000 rupees ($37) each, we figured it was a 2 day trip for the driver and so hefty because there was no other choice. But with that quickly sorted we set about snack shopping.

It didn’t feel too dodgy but Sost has that slight wild west edge to it that most border towns have. We didn’t want to be out when it got dark and the evening was drawing closer.

We’d clocked a couple of shops on the way to the bus office so wove our way back down the road, past our hotel to the trucks while selecting the best goodies we could find.

We had some rupees we wanted to change into RMB so we had some cash ready for after we crossed. When we couldn’t see a money changer but knowing you could change money in Sost we asked a shopkeeper as we made one of our last purchases. How much do you have to change he asked. A quick rummage and we worked out we could change 10,000 rupees. He didn’t have enough RMB to change it all but he changed what he could and for the exact exchange rate XE.com told us it should be. Having now worked out this is how you exchange money we picked another quiet shop and went in to make a purchase and enquired again. We got the same answer and changed the rest of our rupees at only a slightly worse rate.

We finished the evening by checking out the trucks. The drivers were really friendly. When they were with their truck we made sure to be respectful and gesture if it was ok to photo, they were always more than happy to let us. Some gestured for us to join them for chai. Like most places in Pakistan there wasn’t a woman in sight, but being we were in a border town and the light was starting to fade we politely declined with smiles.

Later we realised we’d changed a bit too much money and dinner would only be a light meal. The hotel guy was bemused when we shared a Pakistani omlet and a plate of fries (the 2 cheapest items on the menu). Still, we weren’t going to starve with all the snacks we had! 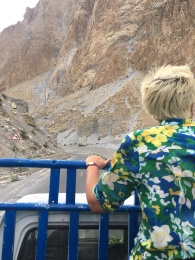 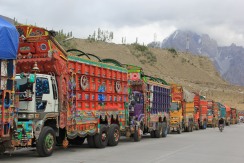 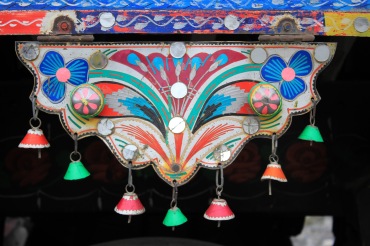 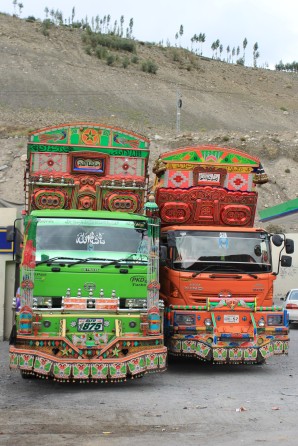 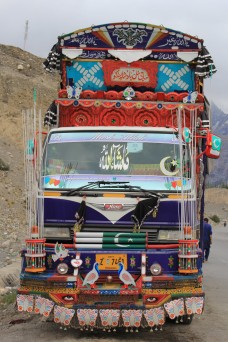 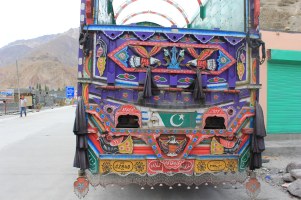 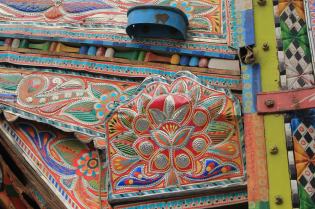 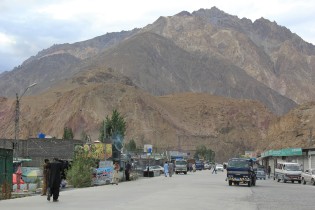