The journey from Rama Lake back to Gilgit can best be described as stinking hot. We suffered badly for the lack of A/C. The scenery was stunning, again following a rough road that used to be an ancient trading route, next to the Indus River. It travels through a big gorge until eventually opening up as we rejoined the Karakoram Highway.

Kabluie’s slow driving for the 4th day in what we discovered was 40C heat was akin to torture. The mountains were radiating heat so it bounced in through the windows adding to the temperature. It was like being in a furnace blast.

We got back to the homestay in the mid-afternoon very hot and dusty. With no fan in our room nor the hang out room we contemplated moving accommodation the next day as there was just no escaping the heat. Figuring we were in the privacy of the homestay with people who work with foreign guests we decided to ignore local custom and put our shorts on. We did all our laundry knowing it would dry in no time. We also made hot water for adding to our bucket to make a hot shower by filling up a couple of plastic bottles and putting them outside.

The Dutch guys got back from their trek too and all of us, even our Pakistani hosts lounged around sweating and moaning about the heat. Worse the water had stopped working so our bathroom buckets were having to be filled from the tank outside, to even just flush the toilet.

Our hosts were not great at looking after us. Given we’d all been on big 4 day adventures we’d assumed someone would think about feeding us all (we’d all shared dinner when we’d arrived the first time). The Dutch guys had gone to sleep under their fan and when they got up mid-evening like us they thought something would happen, but when one of them finally asked about dinner it became immediately clear our hosts hadn’t thought about it.

It was decided we’d go out as Kabluie was staying the night so we had wheels and it meant they didn’t have to cook. We left at 9pm (Pakistanis eat late) to a hotel downtown that they work with. We had the option of chicken karachi or dahl, we ordered one of each to share between the 4 of us. It was a very slow affair, made worse when we had chai after dinner. We didn’t leave until 11:30pm.

The evening entertainment was a stray cat with 3 kittens. 1 had been chased out when it ventured in, but it didn’t take long until we had another. When we discovered there was an entire family we let them in and had great fun covertly letting them feed on pieces of leftover chicken when they sat on a chair at our table. One of them stole a chilli, it didn’t seem to bother it though! We also broke down with hysterical laughter when we heard the door to the kitchen go and Emma and Martin either side of the kitten had both immediately reacted to push it off the table and all Leo and I could see was the simultaneous hand swipe and a disappearing kitten. Overtired none of us could contain ourselves. The poor guy serving us must have thought we were mad.

Our room was stinking hot when we returned and Marie’s stomach protests badly after every meal. It was a rough night. Eventually at some point in the night we dragged the duvet and pillows off the bed and tried to sleep by the windows as it was a degree or 2 cooler. It worked after a while. Or maybe we just got so tired we didn’t care.

The next day we had planned to be a catch up/planning day. Cooler than the day before it was still bloody hot. We hung around in our shorts at our digs for most of it. The water issues were ongoing but a 5 gallon bottle for the water filter in the hang out space had been procured the night before so at least we weren’t all having to go out to find drinking water.

After much sorting, backing up of photos and repacking we did a bit of planning.

Plans have to be flexible here. The day before we had debated if we go to Fairy Meadows. It is said to be a must-see because of its view of Nanga Parbat, lake reflections and alpine camping so we had been intending to go but after frying in the heat of the previous day combined with the long logistical exercise to get there – a 1.5hr bus, 2hr (expensive) Jeep ride and 2-3hr uphill hike with our packs. We calculated that even with a 6am departure the hike would still be in the heat and that wasn’t going to be at all fun. Having seen Nanga Parbat really well a couple of times we didn’t feel a burning need to go. After much debate we settled on continuing our journey north in the hope of finding a cooler climate.

Later in the day we heard there had been some issues in the previous four days in Chilas, the town nearest to Fairy Meadows, with a security operation taking place after 12 schools were burnt down. The jist of what we were told was that it was to do with the election result and some payments being owed for a dam. Those unhappy follow a branch of Islam that makes them sympathetic to the Taliban, hence they don’t believe that girls should have an education. As a foreigner you already get given a security guy to escort you to Fairy Meadows as in 2013 militants dressed as soldiers killed 10 foreign climbers at Nanga Parbat base camp, a day’s hike from Fairy Meadows. Our hosts didn’t know if authorities would allow us to go right now even if we wanted to. It validated our lazy decision and we decided that going north was just meant to be.

Hamish, a guy from Auckland, arrived in the afternoon. He’d come up the same way as us from Islamabad (with the same driver the Dutch guys had) with the owner of the tour agency and another guide. A blokey bloke he hadn’t even realised Pakistan was going to be hot so was lugging 15kg of luggage around. Not liking the heat either, we’ve rarely seen anyone drink quite so much water. He was supposed to have been going to Fairy Meadows but the tour guys had decided with the security situation they’d change the plan as he was doing another trek and the trip back to Islamabad with them so they had scope to shift things around. The tour guys had also only had a self-confessed 2 hours sleep in Naran because they’d been up chatting. We were sceptical about the reasons for their decision to postpone given its a hard hike.

Once the air started to cool a bit in the late afternoon we headed into town to get try and get some better wifi than our patchy mobile data signal, and some groceries.

We’d accepted the Dutch guys offer to share their pasta dinner with them and said we’d find something to supplement it. Grocery shopping is quite challenging, on the face of it many places look well stocked with a variety of goods, many times though we have gone into a general store and it is stacked high with what mainly look like biscuits. As few products are physically accessible as they are behind the counter, shopping becomes a long exercise of pointing at things that look like what you want and having the poor shopkeeper grabbing at stuff until you find what you need. The couple of cash and carry and department stores in Gilgit were a better option for ‘browsing’ but more expensive with it.

We’d walked down the hill from our homestay and found a minivan to take us to the Internet cafe. We clocked some hopeful looking grocery shops on the way there and were reasonably successful with our approach of get a taxi up the road a bit, see a shop we want and get the taxi to stop. We did this three times which although not cost effective saved a lot of walking. It also provided quite a bit of entertainment for the drivers, we just told them that women like to shop and that seemed to make sense of our craziness.

This is possibly our favourite video clip. One of our taxi rides in Gilgit:

With a few drinks, tinned fruit salad, yogurt and most importantly chocolate secured we headed back to our digs. We were a bit annoyed when we got back to find no one there apart from the young guy that cooks and kinda looks after the place (which likely explains why when we’d arrived when no one had been there for a month our bathroom was filthy and even the bin was still full). Kabluie was still in town and apparently, they’d all gone in the Jeep to the hotel in town again for wifi and dinner. While we’d got to the Internet cafe with no issues the wifi was almost unusable so we hadn’t done what we wanted. They knew where we’d gone as they’d told us where it was. We also didn’t know what that meant for our shared dinner and had told the homestay guys we had our own dinner plans so now had no alternative option.

When they weren’t back at 9pm we started on the fruit salad and yoghurt we’d bought to supplement dinner and then they appeared.

Apparently they’d seen us, which must have been on the street when we were shopping, but didn’t think to stop and see if we had successfully used wifi or if we wanted dinner at the hotel.

They did apologise for being so late and asked if we still wanted dinner. We said we did. Leo said he wasn’t feeling great so Emma and Martin took on the cook tasks with Marie helping to chop. Somewhere during that Hamish mentioned how great dinner was. We had little sympathy if they were now cooking a 2nd dinner.

The 3 of them had also done a deal with Kabluie to take them north with their first stop being Karimabad. They knew we were planning to take the bus there the next day and there was enough seats in the Jeep for us, but none of them thought to ask if we wanted to share the ride. We’re not used to meeting travellers like that, usually in tougher countries when you’ve spent some time with others if you have spare seats like that you’d offer or at least make sure they are sorted with their own plans.

We enjoyed our pasta, it was probably the only western meal we’ll have, and we smiled and were polite but we were definitely more than ready to leave Gilgit and travel on our own. 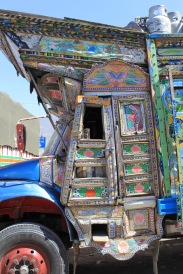 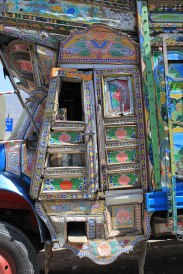 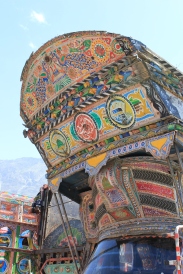 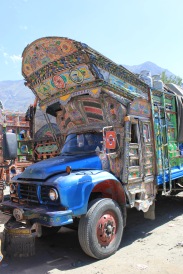 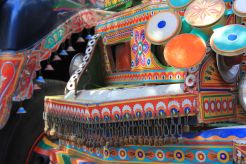 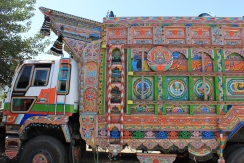 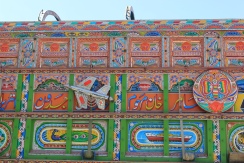 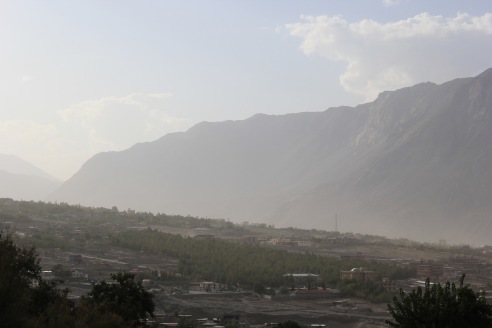