Our 4WD driver had come to Gilgit late on the evening we arrived. We were heading straight out the next day on a 4 day loop; out to Skardu day 1, spend day 2 there, then take 2 days to come back via the Deosai National Park with an overnight stay in Astore, a Himalayan mountain village.

The road to Skardu is bad; rough and unsealed, and there’s currently a lot of construction happening to improve it, making it even slower. It took us 9 hours with maybe a half hour lunch stop to travel 168km (that’s an average speed of 19kmh…). Our driver was generally cautious but he could have gone a bit quicker, our Prado is quite old, it has no A/C, sounds rough, makes some funny noises over bumps and before the end of day 1 we had 3 warning lights on. We think he’s nursing the vehicle.

The scenery was spectacular. We were in a huge valley with massive mountains towering far above us, following a river. It was very similar to the Wakhan valley in Tajikistan but the mountains were bigger. The road is known for being dangerous as it ploughs through cliffs in many places and there are big steep drop offs. We didn’t realise until we saw the second one that the reason some trucks had a guy sat on the front bumper was they were spotting for the vehicle. We’re not sure how they didn’t get bounced off, nor those sitting on roofs and hanging off the back of vehicles.

Here’s a video of the road (with some dodgy camera work):

At the first rest stop there was a big waterfall spilling out of the mountain just behind and the locals were encouraging us to go and see it. Every time we stopped we were encouraged to get closer and we ended up scrabbling along a path on the bank of a raging stream and crossing a broken bridge. A local guy in the end led us to the bottom so we could take pictures.

Kabluie (our driver’s nickname) didn’t look conservative but he told us at the next stop, for a dahl lunch, not to take selfies or have long discussions with men. We hadn’t done either at the rest stop…

To travel so slowly when the scenery is so amazing sounds great but the reality is being bumped around for that long in the heat is physically tough, and going so slowly makes the bumps worse. It’s kinda like being in a tumble dryer for 9 hrs. Marie had chanced breakfast for the first time but her stomach then protested. Luckily the driver went out to do a few things before we departed and was an hour and a half late getting back so she had time to work it through.

We arrived in Skardu in the evening, dusty, battered and tired, but loving the scenery. On the way into town Kabluie took us up to the Shangrila resort. There you can pay an entry fee to walk around their lake. Set in a nice mountain ‘bowl’ it wasn’t really our thing, but we later realised that Pakistanis really like lakes so they think it is a really beautiful place.

Kabluie took us to a guest house, Emma looked at a couple of rooms and picked one. Things are rarely straightforward here and everything seems to take time, there is no such thing as a short conversation. The manager wasn’t there and no one else knew how much the rooms cost. Naturally, we weren’t checking in without that vital piece of info. Then after making sure before checking in that they were doing dinner and they’d given us a menu, it turned out the only thing the chef wanted to make given as we were the only people staying, was chicken biryani or dahl (which Emma had for lunch). We passed and just got tea instead, Emma poked her nose out onto the street and found a tandoor shop opposite so dinner was flatbread, hot out of the tandoor. We were totally stoked to have hot water, and happily steamed the dust off.

It was also a nice quiet place and one of the young guys spoke some English. He soon worked out we drank black tea, so when we got back from anywhere we’d get a gentle knock on the door asking if we wanted tea. Emma also made friends with the old man who was the security guard. He had a stick instead of a gun and confirmed it was for stopping people and whacking them. We gave him a silver fern badge when we left, he had Emma pin it on his pocket and was proudly showing everyone passing by.

Kabluie arrived just after 9am and our first destination was heading out of town to see the cold desert (it’s not cold, it’s just a small sandy desert) on the way to Shigar, 26km or so out of town.

It was a barren landscape like we expected but the surrounding mountains looked even more dramatic from the road out of town. We took a rough 4WD ‘track’ to a small lake called Blind lake, which after 25 minutes of being thrown around in the Jeep was a slightly disappointing sight of a small trout farm and research centre. We politely said it was beautiful but quietly were thinking the rough detour to get there really wasn’t worth it.

Further along the road proper we went to the village of Shigar to see the ‘do not miss’ Shigar Fort. It is actually a mud brick and beam old palace with carved wooden windows and doors. The ruins of the actual much older fort are visible at the top of the hill. For an extortionate price we were ushered around by a guide at a fast pace. Even being first language English we could barely keep up which made us wonder how much the Italians who had been bundled with us understood. We must have seen the whole place in about 6 minutes. It was interesting to see but we felt a bit ripped off. The drive there was better.

Back at Skardu we took an uphill trip to the Satpara Buddha Rock. A carving of a meditating Buddha surrounded by bodhisattvas carved in a rock face dating to the 9th century. Surprisingly in good shape and now protected, fenced off and attended (with a sensible entry fee). There was a bit of a shadow so we hung there for 10 minutes. It’s hard to imagine Buddhism here except for these small reminders of ancient times, the Silk Road and of course the great Himalayas.

Karpochu Fort is a ruined then partially reconstructed fort above Skardu. It is suspected that during Buddhist times it may have been a monastery. It dates back to the 14th or 16th century (nobody quite knows) and unlike Shigar Fort it is much more authentic. Despite it being late afternoon it was a hot and slow climb on a precarious sheer cliff side. We made it up to the huge thick wooden door with a tiny entry hole, diligently guarded by an old man who wedges it shut with a huge post from the inside. The view of the valley and the Indus River below was stunning and Marie happily sat at the top of the fort looking across at the valley for ages whilst Emma chatted to Kabluie who once again had accompanied us up. Turns out that amongst this ancient ruin and what remains of a square shaped mosque with carved beams and doorways Marie was sitting next to a helipad. Emma had not believed that this ancient vantage point had been labelled with a big H and had to go and look for herself.

After relaxing and absorbing the view we left the old man with his binoculars surveying the hillside and slowly teetered our way back down.

We thought we were done for the day but turns out we were on another back road/almost a not a road side trip again, this time to look at a view of nine villages. After a bounce about though very narrow village roads and then three attempts up a mini sand dune we were in a desolate dusty hump of nothingness and Kabluie proudly showed us the location of the nine villages as we stood bemused by the dust, fading light and the fact the Jeep struggles up a sandy bank of what should have been an easy ride. We were glad to be heading back for hot showers and a very hot chicken Byriani for dinner. 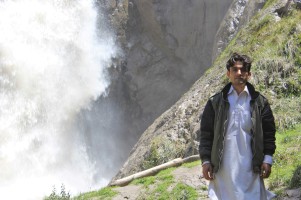 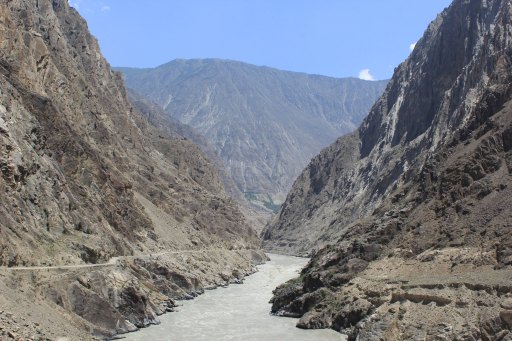 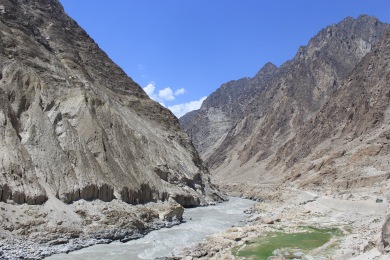 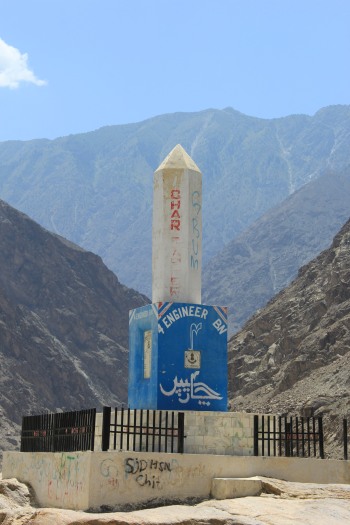 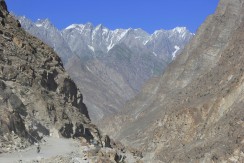 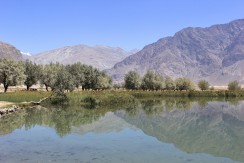 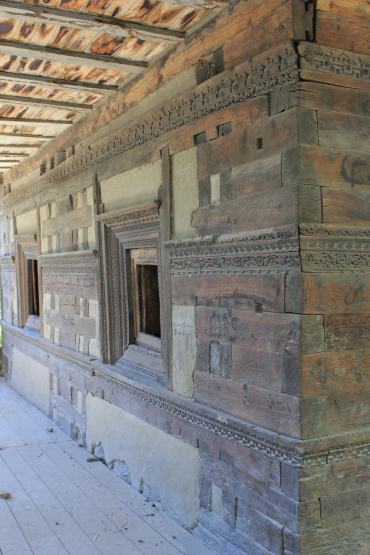 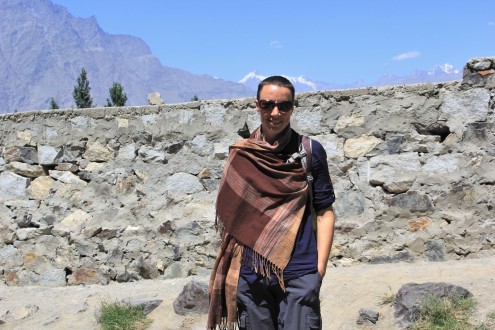 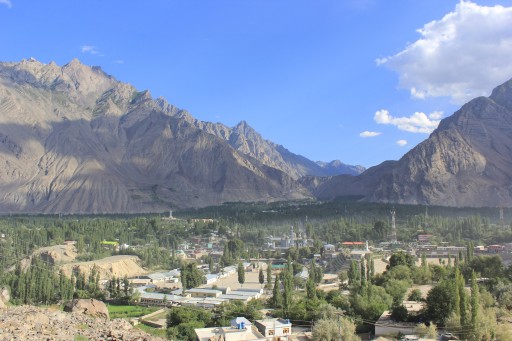 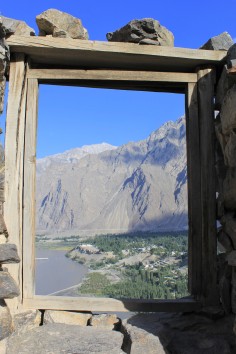 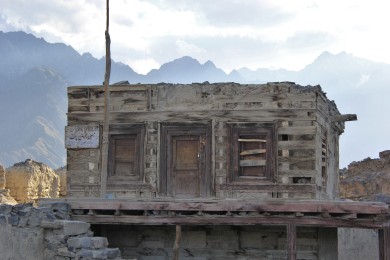 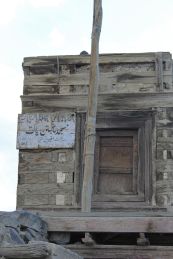 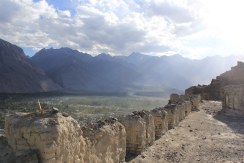 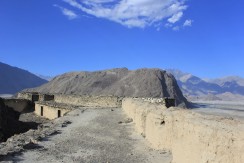