Having opted for the 6:40am train to fit the most we can into the day again we were up at 5:30. Sassi had found another tuk tuk driver to take us to the station. Just a short hop it wasn’t worth getting out of bed for so it was a job for an early riser. We’d met the guy, he seemed nice but when he said he’d pick us at 6am we weren’t entirely convinced he’d show.

We waited until 6:05am then not prepared to miss the train and to have got up that early for nothing, we started walking to the road. A 5 minutes stomp up the dirt road proved our gut feel right as he still hadn’t passed us. The main road was pretty quiet but it still only took a few minutes to flag a tuk tuk. We’d been expecting queues at the station but it was surprisingly quiet, we could have stayed in bed a little longer.

People say to travel by train in Sri Lanka, rather than the buses. We don’t understand that, the trains are hellishly noisy and so bouncy it’s hard to fathom how they stay on the tracks. They lack atmosphere and you don’t get the same interaction or views of daily life of the places you pass through. They are a bit cooler and the big racks above the seat fit rucksacks so that is easier, but they are the only advantages we could see.

It was a long 4 hours. Emma still somehow managed to sleep (thanks to now being so knackered) after we had vidai for breakfast. Marie spent 4 hours trying to find some zen. She was quite excited when we went through a brief shower, the first rain we’ve seen.

The group of tuk tuk drivers that approached us when we arrived in Colombo tried to rip us off. They wanted double what we’d paid to get there when we’d left. A driver a few metres away offered us the same price we paid previously and some kind of dispute broke out between the 2 as we went with him. We figured the first group hadn’t liked being undercut for a fair price. They wouldn’t have understood we wouldn’t have gone paid a rip off price, we would have just walked out the station and flagged another.

It was only 11:30am when we arrived at our B&B (more like a small hotel) and our room wasn’t going to be ready for an hour so we dumped the rucksacks and headed off to find a nearby cafe. Hot, tired and hungry, when we got there we couldn’t decide on what the plan of attack was for the afternoon so in the end we got a couple of cold drinks and something full of sugar to tide us over until our room was ready. We looked like backpackers in Asia – we were filthy after so many tuk tuks, buses and trains. So we decided a good place to start was with showers and doing our laundry.

When some form of normality had been restored we headed out. We were only semi clean and tidy – neither of us could bear to part with our shorts to wash them as for most of our trip we can’t wear them so we’ve only packed one pair each and we only have 2 days more we can wear them. Clean blouses hid well shorts that looked like they’d been worn for a week (they haven’t).

We wanted to get a gift so decided to start by going shopping. We’d googled a couple of areas and headed out. The first stop was the wrong place – the difference between road and street in a name – the second (which should have been the first) was very nice but it didn’t look like you’d get buy anything for less than a kidney. The third place we tried was all the markets around the red mosque (we’d wanted to see the mosque anyway). They were beautifully busy and chaotic, it was like being in a cleaner India. As we walked we also found the Hindu temple just around the corner from the mosque.

Next we headed to the Dutch Hospital, a colonial era complex set in the Fort (historic) area that dates back to the early 1600’s and is now converted into nice shops and restaurants. There are a couple of really nice gift shops and Marie found something she liked. After having a wander round we had an early dinner and a few drinks at a bar on the perimeter. A long conversation with an American woman on the last day of a tour with a group she hadn’t gelled with distracted us from the planning we were supposed to be doing. By the time we’d peeled ourselves away and taken a tuk tuk back to our digs we could barely keep our eyes open.

Our last day in Sri Lanka. The first day in a week with no alarm. Not that we actually managed to sleep in.

We prioritised getting sorted ready for changing countries so we could relax for the rest of the day. Marie got left reordering her rucksack, backing up photos, sorting out paperwork and logistics while Emma took an expedition with a tuk tuk driver to post the gift and our Sri Lanka guidebook home. Turns out the post office doesn’t sell envelopes or paper so they had to go to a stationery shop in a department store (the tuk tuk driver went with her) then back at the post office a very manual paper based system saw her queuing at 4 different counters to complete the postage process. Like everywhere the staff were helpful.

By midday we were organised and headed out. We started by taking a tuk tuk to possibly the most photographed site in Colombo, the meditation centre on South Beira Lake, before walking to the nearby Gangaramaya Temple. A crazy place it is a complex of completely different temples combined with something akin to a religious junk shop. We hung out for a bit when we’d finished looking round, just to take a quick break. The temple elephant popped in, then out again. They’re surprisingly fast walkers.

We caught a tuk tuk back to the Fort area so we could walk round the old Colonial buildings properly and then we decided to finish at the beach a few kilometres south of the main city. Traffic had been horrendous all day, even in tuk tuks that weave and will drive on the wrong side of the road. It took about 45 minutes to get to the beach but the flip side is we got a good look at one of the main streets.

We chilled out at a beachside bar for a couple of hours and watched sunset. It was pretty quiet and we enjoyed being by the sea, we’re not going to be seeing it again until we get home.

The tuk tuk we flagged to take us back took all kinds of back streets to try and avoid the traffic but it still took quite a while. He didn’t know the road our guesthouse was on so we had him drop us at a landmark not too far away and flagged another for the last hop. 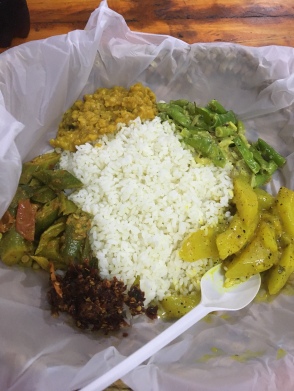 Back at the guesthouse we asked the guy on reception where we could find good Sri Lankan food. He directed us to the small restaurant on the next street where he eats lunch every day. It was really good food, a couple of tuk tuk drivers came in so it was doing a steady trade. All the curries were in different clay pots and they served it in a basket with a plastic liner.

These traditional meals are such a good option because you get given 5 different curries so you know you’ll like something. 2 meals and 1 Pepsi cost us less than NZ$4. One drink at the beach had cost us more than that. It was a perfect way to finish our Sri Lankan exploits. 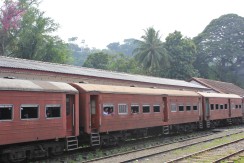 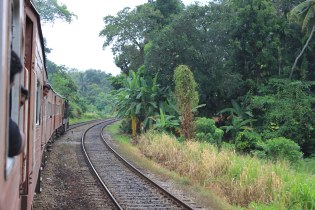 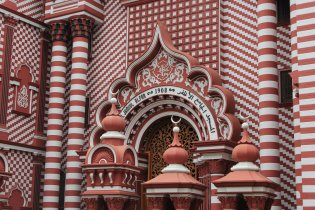 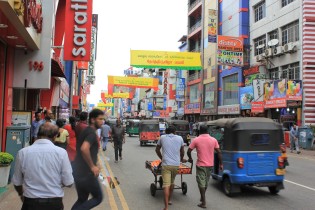 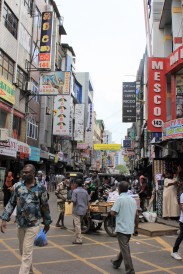 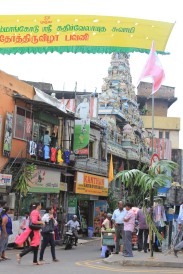 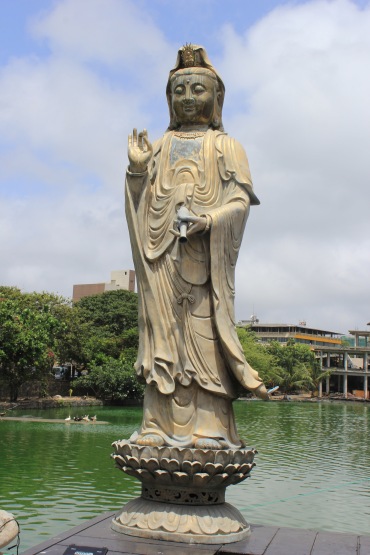 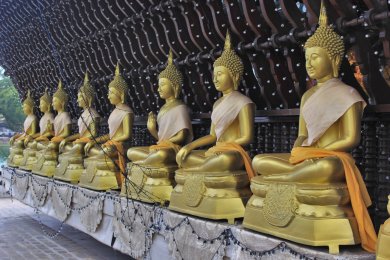 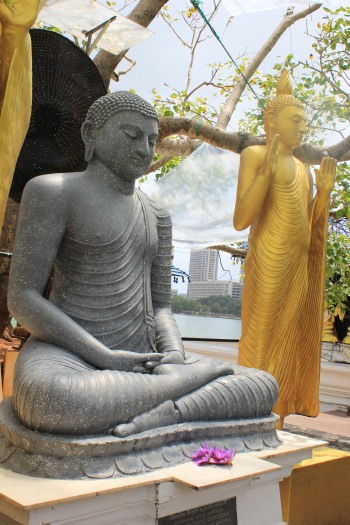 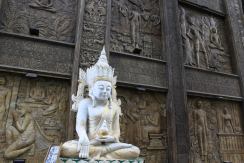 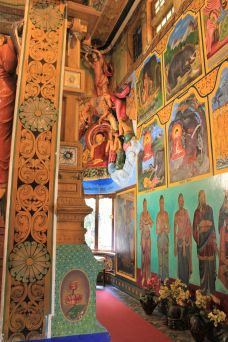 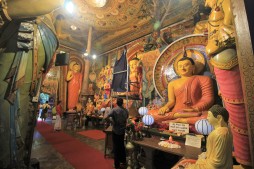 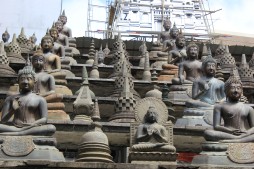 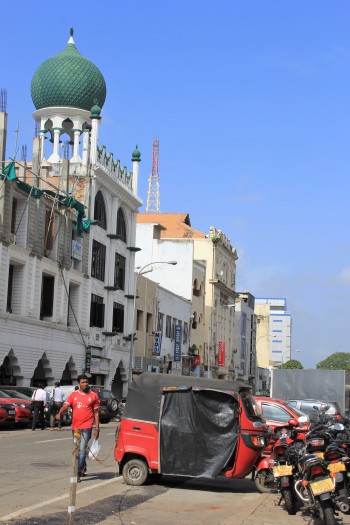 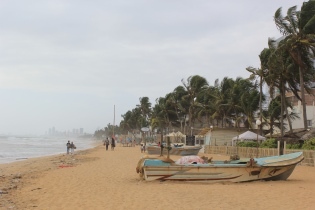