We woke as soon as it got light as the room had no curtains, but this gave us a good view of the valley below, as there was some blue sky and sunshine. Having had a brief glance around 5:45am we went back to sleep partly because we were warm and partly because we had spent the night waking up intermittently due to the altitude. At about 3,500m we hadn’t struggled with headaches or dizziness but the waking up did get us.

We got up at 7am and we had a walk around as the mist rose and fell in the valley with both the mountains and Paro coming into view for fleeting moments. We waited a while for breakfast after packing everything up. Sadly we got mango Kellogs cornflakes which yes, do taste as strange as they sound, eggy fried bread and some kind of vegetable fried rice. We were hungry though so ate a bit of everything. While waiting for Pensoc and the cook to finish up we went for a walk out to the stupas on the ridge again to try and capture a clear photo but the mist was too fast for us so we used it as a warm up for the walk down.

There was a lot of activity at the nunnery. At 4:30am they get up and study until 6am, when they have morning prayers. Today they were having an extra prayer session as one of the nuns was unwell and having an operation at 8am so at 8am there was some energetic chanting and singing from the temple.

Against the mist, the evasive mountains and steep valley below we remembered once again why these places of spiritual pursuit are perched so high. We said goodbye to a few of the nuns who were still around the temple courtyard or on daily routines of washing, and walked ahead of the guys who were still not ready. We passed two monks carrying up some supplies, accompanying the returning Lama. They looked a bit like we did when we reached the top the day before, which made us feel better.

Striding downhill we enjoyed the birdsong and reminded ourselves of how few people make it here. We were told that not many tourists come. We understood now why the tour agency really hadn’t prepped us at all for it, given us any idea of what to pack, how the walk would be or what the facilities would be like. It’s only because we are sensible that we had enough clothes and the right type of clothes (hats and thermals) that we didn’t freeze to death.

35 minutes later we returned to Sangay and a shiny clean car. He obviously didn’t take our comments onboard about the fact that we don’t care if the car is clean as it is only going to get dirty again. We were quite a way ahead of the boys so we talked to Sangay telling him that keeping the music on was a good thing. He’s quite introvert like a lot of Bhutanese so we were gentle with him.

Tuesdays are ‘Pedestrian Day’ meaning unless you have an emergency vehicle or a tourist car you are not allowed to drive in the towns until 6pm. The Police strictly enforce this so out came an ‘on Tourist Duty’ sign onto the front window to keep us out of trouble.

Last night at 3500m we had been able to see Cheli-La Pass which is the summit of the highest motorable road in Bhutan. From our pick up point it didn’t take long to get there. It is at 3988m and is covered by prayer flags fluttering in the breeze. You can walk from the road upwards and amongst them which we did taking in the thick white cloud of the Paro valley and the forested green Haa valley lit by sunshine amongst the cloud and blue sky. It was like two weather systems collided on the ridge.

We were very happy to be able to finally see the scale of the landscape and how green and unpopulated it is. Haa was 26km down a steep switchback road and in the back of the car the smooth riding made Emma feel a bit sick. We were soon deep down into the valley we had seen from above. The valley held a large braided river but recent flooding and preparation for a hydro power plant downstream has meant the river has some man-made banks that channel the cold mountain water.

We checked into our ‘basic’ hotel which they had warned us about – it had hot water, a bathtub, toilet roll, towels, soap, on demand tea and coffee and a balcony. With a restaurant onsite we had a bite to eat before we headed out .

Haa is surprisingly close to the Tibetan border. In fact from the end of the road its just a 2 day walk. The southern part of town is taken up by the Border Security Force – which is basically the Indian army and the barracks of the Royal Bhutan Army. The northern part is residential with general stores along one street and a couple of hotels. Its a village more than a town and with a strong agriculture focus, and a large area taken up by a government run boarding school. The hotel was on the main street distinguished like all the other businesses by a painted sign over the doorway – there are no adverts here. The buildings are required to look the traditional way. With no traffic it was really quiet.

Pensoc and Sangay took us to a village in the upper valley in the afternoon as the sky broke up to reveal more blue. The village is called Haatoe and is based around farming. The narrow walled lanes are wide enough to fit a cow, and day to day farming activity can been seen, from attics that store dried hay to the turnips being grown for the families food, and the puppies snuggled up together that will become farm dogs. The Bhutanese take on Buddhism is seen from the decorative paintings on the buildings, to the wooden box on the wall that houses a shrine, to the stupas buit from a pile of stones. Although village attire is not the traditional gho or kira the distinct architecture, drying chillies and landscape remind you you are in Bhutan.

The people we met (with interpretation assistance from Pensoc) were friendly and having seen a significant amount of building damage done by earthquakes we watched some people building a new house funded by the Bhutanese equivalent of EQC. The King himself closely oversees disaster recovery and earthquake compensation. The new house was being built just across the footpath from the damaged one, and was of course being made in the traditional style. The painting of the outside will take 20 days and the interior 30 days. We managed to get a closer look. No such thing as the red zone here – not much health and safety either. Emma asked Pensoc if this was because people had such good health provision (ie free) he smiled. 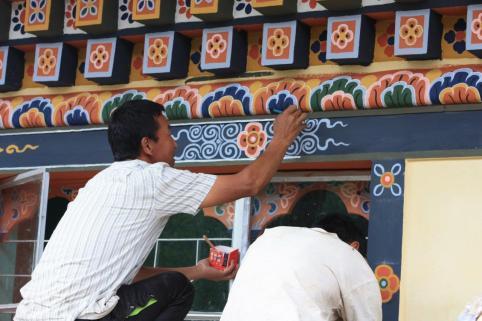 We pretty much grilled him about everything about village life – from rabies to marajuana (which incidentally they have heaps of growing wild but all they do with it is feed it to pigs to make them docile so they get fat quicker, which explains their liking of pork) finishing on a good conversation in the car about Bangkok hospitals and C-sections.

When we returned to the car we met a man with lots of yellow sacks of something – turns out this is black market silk he can sell for 100% profit – just brought back from a 2 day trip over the mountains. He could go to jail for it, or get shot whilst he’s out there in the border area but the risk is obviously worth it. Pensoc told us of stories of men taking up to 25 horses up into the hills and resting until nightfall then crossing over to get goods before doing the reverse. We wondered how you hide 25 horses…

Despite it being Pedestrian Day it also the 2-3 day celebration of the Hindu god of ‘machines’ and although not something that everyone celebrates here with many of the mechanics and drivers  being Indian or of Indian heritage today the party was in full swing as we followed 3 Indian lorries on the way to the village with lots of people in the back and the deity that eventually gets thrown in the river. Also officially ‘Dry Day’ (every Tuesday) the merry party goers were climbing and dancing about the trucks throwing beer bottles out to the side of the road at which point Sangay dropped back a little. We watched one of them climb onto the roof of the cab and we were all amused, if not a bit nervous. The road back was quieter passing a couple of horses, some cows, a dog and some jubilant children walking home in their gho uniforms from school.

The rest of the afternoon was spent taking in the view of the three mountains that are the three protector deities for Haa, repacking the rucksacks, doing the laundry and enjoying the heating being cranked up as the mist fell and rain came in for the night. 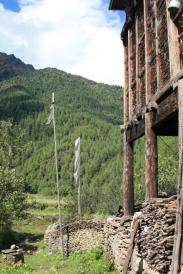 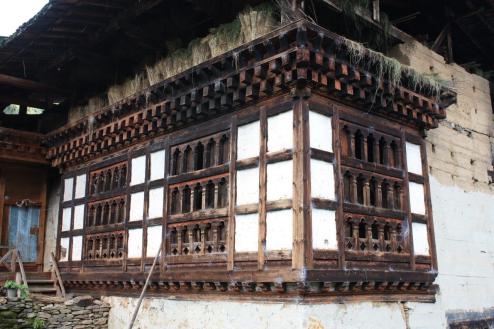 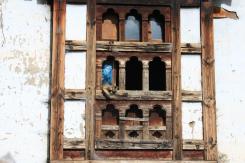 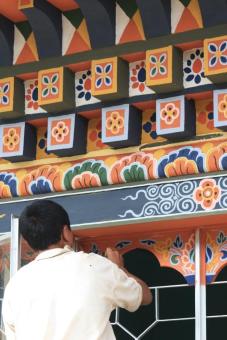 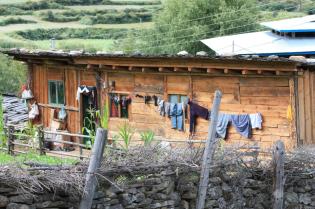 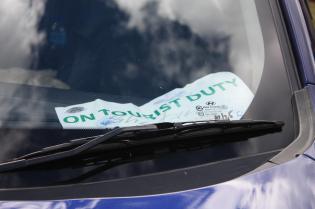 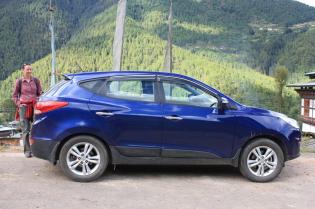 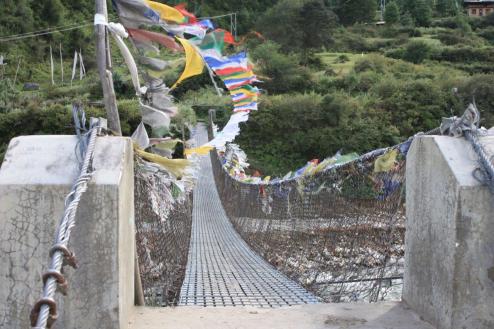 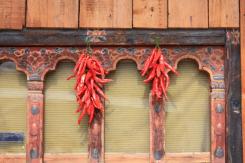