Sitting high in the Indian Himalayas Ladakh is a piece of Tibet outside of Tibet. Leh is at it’s heart. 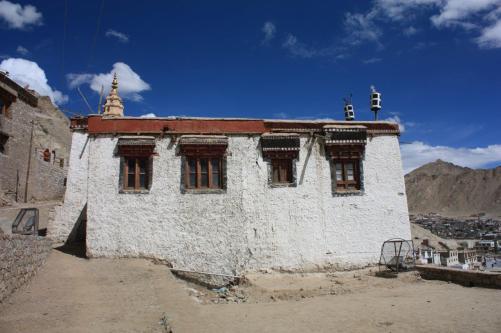 After almost 14 hours the four of us staggered out of the jeep at Leh jeep stand, tired, with bodies battered and heads aching. In Keylong the night before we had met an older guy at the place we had dinner who comes every year to Leh (well tries to – in 2010 massive landslides meant that Ladakh remained cut off) and has travelled all of Ladakh. Finnish by birth he has led an interesting life and calls three countries ‘home’. We had of course asked if he had any recommendations for places to stay. He told us that he stays in the same guesthouse every year a little away from the town centre in a quiet area, complete with an organic garden and home cooked meals. He wrote the name and it’s location down and told us to say he had sent us there. He said the owners were very helpful and he considered them his family. We decided to follow his recommendation and a quiet place sounded good to the guys so together we rolled across to the taxis (small minivans) and got one to the guesthouse.

After the taxi driver had asked many people (there are heaps of guesthouses in Leh) he dropped us at the sign for it on the road and we walked a short way down a network of paths until we found it. With 2 stories of rooms set in an L shape we got the upstairs end room with 2 sets of windows. For the second time the guys were our neighbours taking the room next door. 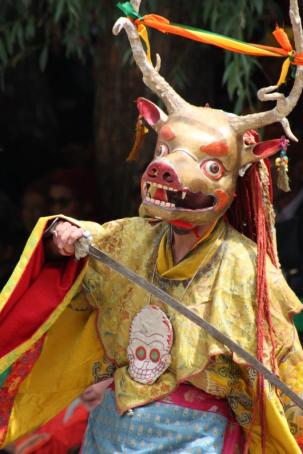 By luck rather than planning we arrived in Leh on the first day of the eight day Ladakh festival. At breakfast the next morning we found out from the guesthouse owner that there was a mask dance on that morning at the central gompa (Tibetan Buddhist monastery). We had moved slowly that morning but managed to walk up the long gentle hill into town and find the gompa in time to catch the last two dances. Afterwards we explored the town centre and got our bearings. Like Manali, Leh is almost completely the opposite to Delhi – fresh air, great views, laid back and little hassle. Shopkeepers still try to get you to go in their shop and each has their own patter but we still have no problems politely acknowledging them and walking on by.

We bumped into Bruno and went to a Tibetan restaurant for black tea (we have lived on black tea since Manali, not sure if we can drink tea with milk anymore) and a bit of lunch. We tried momos for the first time, a Tibetan dish. They are like mini cornish pasties made of pasta, filled with different things. We had ones with a vegetable filling as we’ve rarely eaten meat since Malaysia and certainly have no intention of doing so in India. They were cheap and yummy and we figured that would be our lunches in Ladakh sorted.

After more exploring in the afternoon (aka walking in circles for most of the time), we found Moti Market which excited us as it seemed targeted at locals. We found our way to the polo match as part of the festival, we’re told it was a grudge match. We were also told that it was different to usual polo because they were using short’ish horses. Having never seen a polo match before we took their word for it. It apparently was a big event for the locals, and there was certainly plenty there but it was also a big event for the tourists. We found a spot to sit on on the front row of the tiered concrete steps that were the seating. Basically the crowd sits on the boundary line, we figured being on the front row was probably quite a dangerous place. Wiser people had arrived early to get seats marginally further back and higher, but really we were just too lazy to move. 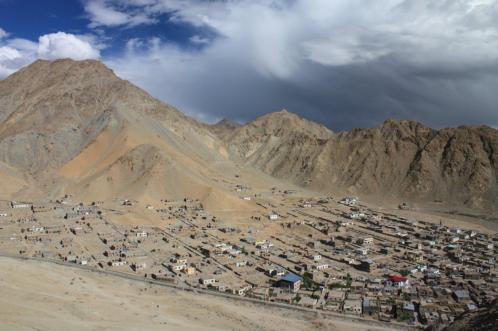 They started by sending out 2 water tankers to wet the dusty ground. The teams then lined up in front of the VIP box and shook hands with some VIPS. Then the game got underway and we discovered that this is quite a fantastic spectator game – fast and the players are so highly skilled at both riding the horses and being able to hit the ball with the stick from such height with such accuracy. However, we guess that most polo matches don’t allow the crowds to sit quite so close as this match involved everyone.

When the ball inevitably got hit and rolled into the crowd the players were not phased one bit and went galloping up and whacked the ball like normal (at which point the crowd would cower and cover their heads with their arms). If you were unlucky enough to have the ball roll to you it meant that you had at least 2 horses galloping towards you and 2 things equivalent to long mallets and a wooden ball to avoid – all less than a foot away from you. The best course of action is to lift your feet up and try and bury your bodies into the person behind . We were quite lucky really the ball didn’t come right at us too many times.

The crowd behind the stupa in the right hand corner of the pitch (only in the Buddhist Himalayas would you have a stupa on a polo ground) seemed least lucky as they often struggled to get the ball out from behind it and there was much ducking by the crowd. We’re told the score was 2-2 but truthfully we spent so much time watching the ball in case it came our way we didn’t even count.

That night we had dinner at the guesthouse as they make a lovely home cooked dinner for guests that want it, in that they make several dishes and guests all eat together. Bruno chose to have dinner there too and that is where we met two Ladakh veterans. Karen is a Dutch woman who must be in her mid 60’s, she comes every year and has several projects on the go here. She is hugely well connected both in Ladakh and Dharamasala. She was preparing for a a trip to Lingshot, a remote village which used to be a 4 day hike but a new road has made it an 11 hour jeep trip and a 1 day hike. She was spending her days organising horsemen, cooking, camping gear and provisions. Ingrid a younger woman, also Dutch is spending over a month here – she had previously spent a winter here in Leh. She had recently returned from Lingshot and had brought back a dog she thinks is about 6 months old. There are no dogs in Lingshot and the theory is that someone abandoned her. The locals didn’t really know what to do with her so decided that they would take it in turns to look after her with every family looking after her for 15 days. Great in theory but in practice many families did not want to look after her and many didn’t really know how.

She didn’t get fed properly and started going after the lievestock as she was hungry. Ingrid had found her on a short chain and talk by the villagers of killing her. They didn’t want to because they are buddhist, but with her going after livestock they didn’t know what else to do. Long story short Ingrid rescued her, brought her back to Leh and was going through the process of getting her vaccinated and sterilised when we first met her. When Ingrid left she would become the pet of a family she knew. We got to know both Ingird and Karen quite well during our time in Leh and we learnt plenty about ‘small Ingrid’ (the name her guide had given the dog).

The next day we spent the morning exploring the Tibetan Refugee markets, of which there were numerous around the town for the summer. Emma and her necklace had departed company a couple of months ago and she took her time finding a suitable replacement. After having momos for lunch we explored the Old Town, which is full of winding alleys and traditional mud-brick Ladakhi houses. From there we climbed up to the palace then the fort. They dominate Leh, particularly the fort from its position on top of a high rocky ridge, and both are Tibetan style.

Ladakh used to be a kingdom as far back as 975AD. The palace was built in the 17th century but has basically been unoccupied since the royals were stripped of power in 1846. An exhibition of old photographs of Leh was on as part of the festival so we had more than an empty building to explore. They hadn’t worried about lighting the photos though so we had to look at some of them with a torch. We enjoyed exploring the corridors and rooms.

The fort sits significantly higher than the palace and is accessed by a loose zig zag path. It was hot (it had been since we arrived, we were looking forward to cool mountain weather but instead got hot sun and warm nights), there was full sun and being at altitude we puffed and panted our way to the top. We were rewarded with spectacular views, on some of the highest mountains visible it looked like it was snowing. The fort itself is quite small and is somewhat dilapidated but you can walk round, ducking and pushing your way through all the prayer flags, a wooden balcony type thing that juts out from and rings one of the towers. It is a little scary but quite exhilerating. 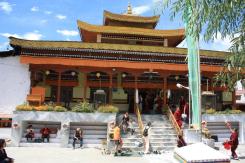 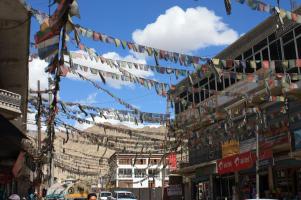 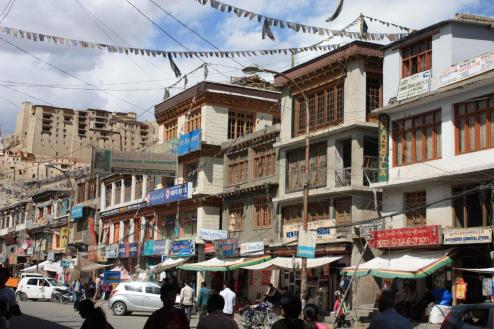 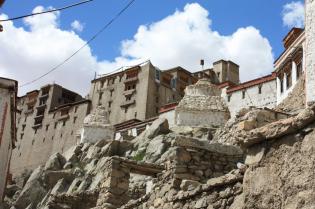 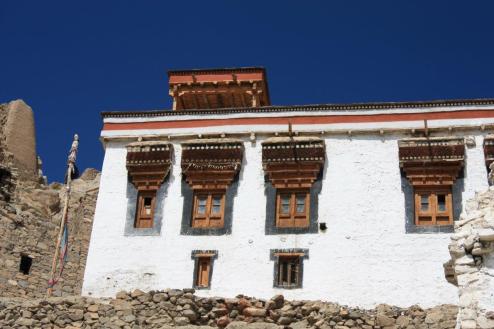 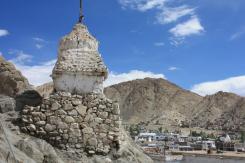 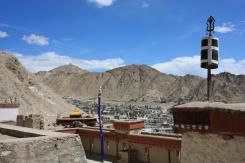 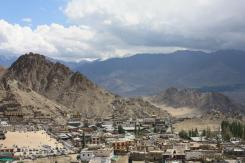 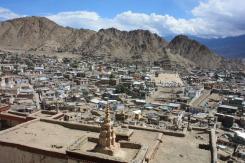 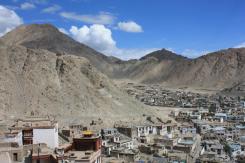 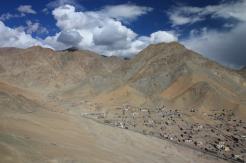 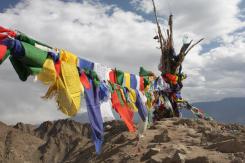 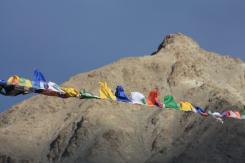 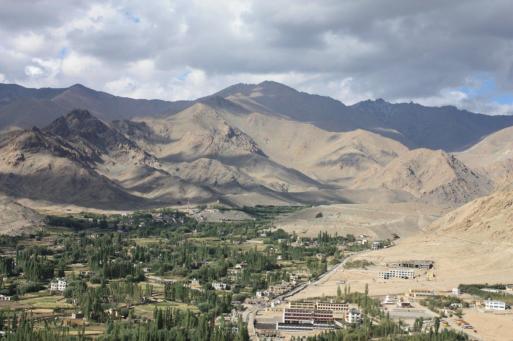 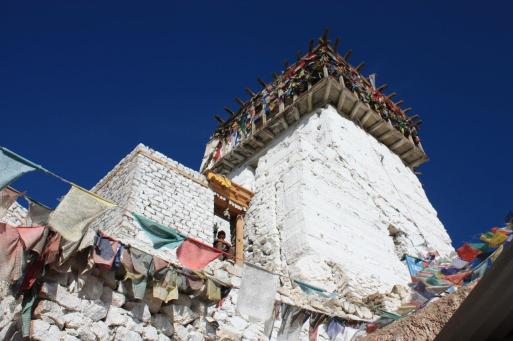 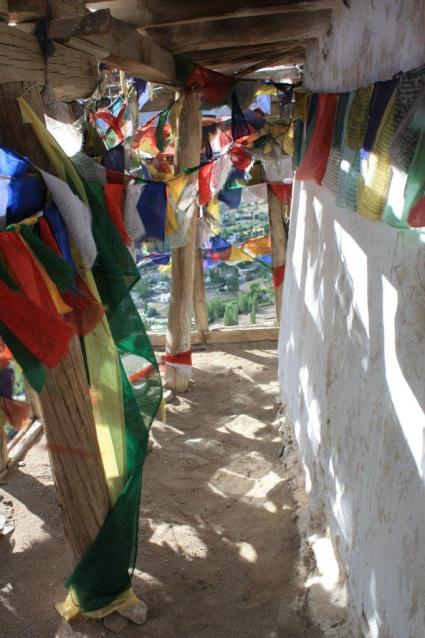