To get to the Nature Lodge in Bilit on the Sungai (river) Kinabatangan we had to get a taxi at 6am from Kota Kinabalu to ensure we got to the bus station early enough to get tickets for the 7am bus to Tawau. An American guy, Colin sat near us and was quick to ask if we were going to the Lodge too. We figured the 3 English girls that got on were also heading there. The journey took 5 hrs 30 and we had a spectacular view of Mt Kinabalu.

As we weaved our way up to the National Park’s entrance gates the view into the distance was exactly how you’d expect Borneo to look – layers upon layers of mountainous ridges covered in thick jungle. The hour and a half we spent going over that set of mountains was mildly torturous. We knew we were in for a rough ride when we got on the bus and there were sick bags already on standby. Plenty were sick, but us tourists all managed to hold our own, even though we all felt pretty sick. Thankfully the bends only lasted for those 90 minutes, otherwise we were flying back! We discovered later that the others were all thinking that too!

We got dropped at a ‘coffee shop’ which turned out to be a collection of restaurants on the main road, shortly before our turn off to the river. We were all happy to get off, the aircon had been set on arctic the entire way, even the bus staff had jackets on, and we’d all nearly froze. After the mountains when we hit the flats we also hit the palm oil plantations. The combined size of them is phenomenal, we spent literally hours passing them and often they extended as far as the eye could see. It needed no imagination to grasp how destructive the plantations are to the jungle.

Our jungle bus to take us to the lodge was late but the wait wasn’t unpleasant. On ordering something to eat we discovered that ‘roti’ here is actually white bread, toast and jam which wasn’t exactly what we were expecting! When the bus finally showed we all piled on and went speeding off. We were all surprised as we turned off the main road as we’d expected rough and/or gravel, but instead it was a wide sealed road. We realised why when we started passing palm oil plantations again. Eventually it did turn to gravel and before we knew it we had arrived in the village. The info we had been given said it would take 2 hours on the jungle bus. It didn’t, it took about 30 mins. The driver beeped his horn and we all piled down onto a jetty as the boat came across the river from the lodge to collect us.

Basically the lodge is a jungle camp. We had a camp induction and were then shown our rooms. We were chuffed to discover that our cabin was not only detached but that it had a bathroom. We thought only the more expensive chalets had bathrooms and this tour was expensive already so we’d gone for the cheapest private room option. 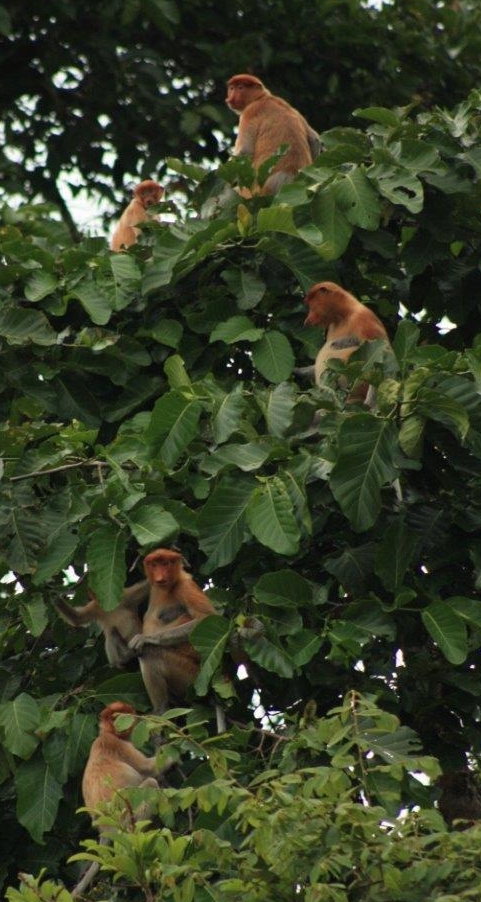 No sooner had we arrived than we were out on our first boat trip, up river, wildlife spotting. The wildlife hides in the jungle during the day and when its cooler before sunset and after sunrise they come down to the river (in fact some of the monkeys sleep by the river on branches with their bums facing the river). So the camp schedule goes: Day 1 – boat trip at 4pm till just after 6pm, dinner, night walk in the jungle behind camp, bed. Day 2 – morning boat trip at 6am, breakfast, 3 hour jungle trek, lunch, afternoon free, afternoon boat trip at 4pm again, dinner and another night walk, bed. Day 3 – another boat trip at 6am, breakfast, pack up and ship out.

From the river we saw: heaps of monkeys, including lots of babies – troops of naughty long tailed macaques, some langurs and lots of troops of proboscis monkeys, which are only found in Borneo. We watched them feed, playing, grooming and jumping through the trees. Male proboscis monkeys can weight up to 25kg, watching them fling themselves across from tree to tree and watching the trees sway and groan is quite a sight. We also saw a few of both types of crocodile in the river (freshwater and saltwater), monitor lizards, 3 types of hornbills, serpent crested eagles, storm storks, herons and a buzzard. Amazingly the guide also spotted a viper (deadly) up a tree from the river. Marie declined to look.

It was really difficult to photograph what we saw. We could get really close to it because we were on the river but there were 2 issues: a) constant movement from the boat, when when the engine was cut, making focusing especially with slow shutter speeds impossible 9 times out of 10 and b) the light, because we were out at the beginning and end of the day. Often it was a case of a light sky with an animal in dark foliage, making taking anything other than silhouettes very difficult. Most photos ended up being deleted. We did occasionally get things on the right side of the river (that’s in the light) but until we find a computer with a decent screen we’re not going to be able to see if any are focused properly or not. 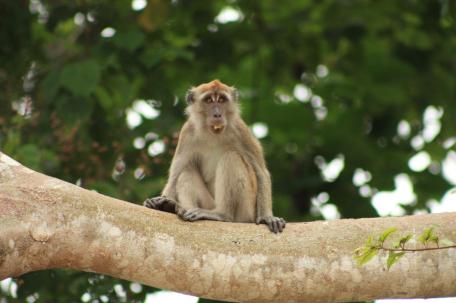 On the second afternoon boat trip we were exploring a narrow branch of the river (fun fact on all the branches of the river there are orangutan ‘crossings’ 2 cables strung high across the river like electric cables, because orangutans can’t swim). When a thunder storm started we got heaps of really close up viewings of monkeys because they all dropped down to the lower branches of the trees and sheltered. They weren’t going to move even with the boat right in front of them. It would have made for some fantastic photos but the camera wasn’t coming out in that weather and the waterproof camera just wouldn’t have dealt with the low light.

Pigmy elephants live in the area and were spotted from the river the day before we arrived. The camp is surrounded by an electric fence to keep the elephants out. Sadly they didn’t put in an appearance when we were there. We did find an elephant track on our jungle walk, apparently the previous day the guided trek had turned around because the guide had found fresh footprints and broken twigs. Pigmy or not, meeting an elephant in thick jungle would be too close an encounter. We were all told to tell the guide if we saw or smelt one, but other than that if one charged us the locals believe they can’t turn right as well as they can turn left, so we were to run right and/or climb up a very big tree. Marie wasn’t going to take her chances climbing a tree and meeting a snake so her plan was just to run faster than the slowest person in the group…

We passed below an empty orangutan nest on the walk and found bullet millipedes, but thankfully found nothing else. We didn’t even acquire any leeches between us. Marie was the only one of our group to acquire a leech at all. On the second night walk after the thunderstorm one dropped onto the back of her neck and amazingly she felt a pinch as it bit so realised it was there. It was quickly removed by a dab of deet. Night is the best time for spotting birds as they’re asleep and don’t move because of torch light. We saw a purple kingfisher and another red and green pitta. Both nights we were lucky enough to find a western tarsier, the smallest monkey in Borneo. they are quite amazing- the guides call them the 5 in 1 – tail of a rat, feet of a frog, body of a money eyes of an owl and ears of a bat. They’re actually quite rare and we were lucky to see one, but on the second night the guide took his camera out just in case and when we did amazingly find another one – he took more photos than us!

Early mornings on the river were beautiful, the river was misty and the jungle kinda steamed as the mist rose and jungle started to warm up and come alive. Our last morning boat trip before packing up and heading out began very quietly, there didn’t seem to be much wildlife about. Eventually we found some birds and a monitor lizard. We of course were all hoping for an orangutan or maybe an elephant. Suddenly the guide turned the boat and headed quickly for the other bank. An orangutan sitting high up a tree right on the edge of the river eating figs. Orangutans are solitary and this was a female. She wasn’t at all bothered by the boat being directly underneath her. We sat and watched her until it was time to head back for breakfast. Sungai Kinabatangan is one of the few places in Borneo that you might see an orangutan in the wild, that’s why most of us were there, but it is not something that the lodge actually promotes and on the way back the guide told us they only see one usually every 3 or 4 months. We were very lucky. 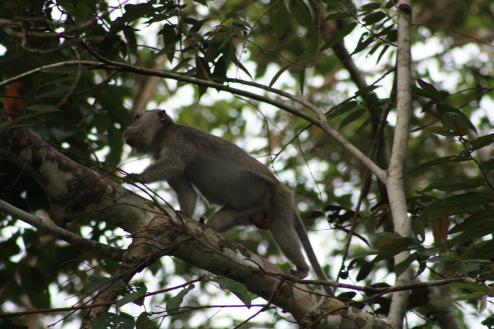 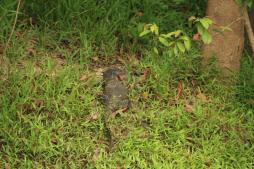 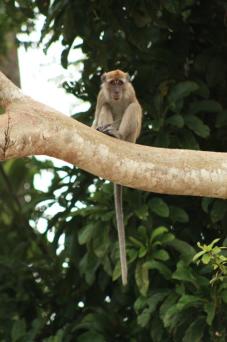 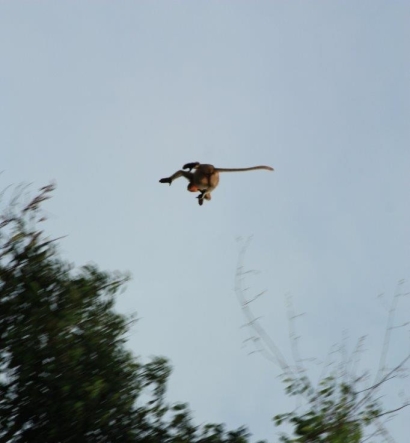 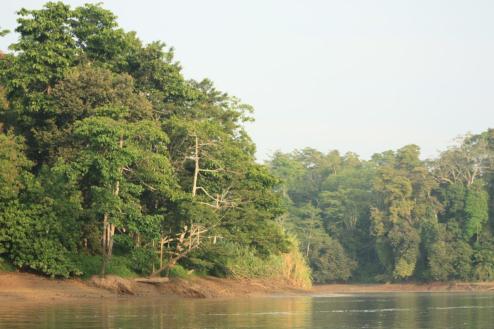 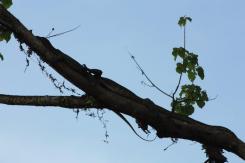 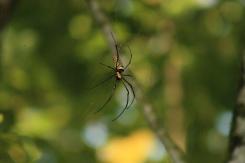 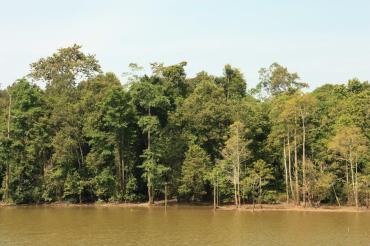