After asking around in Taganga we found a boat to take us 1 hour round the coast to Cabo San Juan de la Guia in the Tayrona National Park. The first couple of people we asked wanted a lot of money 50,000 and 40,000 each but then we met John hanging out on the beach and he does it for 35,000 pesos per person as he’s a friendly chatty guy that easily puts groups together (about 14 went out on our boat). We asked about his name (he’s a tall carribbean Colombian black man) and when he was young mucho boats from North America used to land in Taganga to buy massive quantities of cocaine and marijuana and his parents got to know many American names. As he said its much different now, as evidenced by the American warships based in Santa Marta and clearly visible out at sea and the occasional helicopter overhead.

The boat dumped us in a Caribbean paradise – warm clear sea, golden beaches, coconut palms (which should carry a safety warning the number of coconuts we saw or heard drop off), thatched open sided huts and really cool big smooth rocks between the beaches. 2 hammocks became our home for 2 days.

Cabo San Juan de la Guia is a backpacker hangout, it has 1 restaurant and 1 shop and an awful lot of hammocks in communal sleeping areas (there was 25 hammocks crammed into our area with another 10 round the corner) and a lot of tents. But it doesn’t feel crowded as so many beaches along the coast are linked by paths though the jungle and during the day people vanish to different places. It’s only at night, particularly dinner time as the one restaurant only opens for dinner 6-8pm, that you realise how many people are there.

We spent 2 days, swimming, lazing in our hammocks when it got too hot and eating. And occasionally exploring some of the farther beaches, but while the beaches and camp were fine the moment you start down the jungle paths between beaches the mossies descend. Although we did see lots of crabs, a red squirrel and lots of real cool lizards by the path (particularly when we were walking barefoot), some of the lizards were over a foot long. It was also blistering hot, we tended to get the cameras out in the early evening when the light was going and light cloud had formed so they don’t really portray how sunny and hot it was. At night we sat back and enjoyed the lightening displays of far off storms.

Most people are going back to Taganga so take only a small bag with beach kit in it to last a few days but we wanted to walk through the park and continue onto Venezuela so had our big rucksacks. We were pretty grateful to have the extra clothes when we got a tropical storm on the first night as the temperature really dropped.

Most of our hammock neighbours left on the second day when someone discovered that getting the boat out only costs 15,000 pesos. It costs so much on the way in because you don’t pay the 25,000 peso National Park entrance fee. Should be illegal, oops that’s right it is… The proper gateway to the park is on the eastern side accessible by road where they also check the entire contents of your bag, you then hike for a couple of hours to reach the camp or another one 45 minutes closer. So you can walk out and catch a bus back to Taganga but its good hike, particularly in the heat, so the boats fill up their return journey by offering a reasonable price.

We had a walk down to the other camp where we realised that everyone had wristbands to show that they had paid the entrance fee. Shit, we had just assumed people were given an easily lost ticket. That afternoon Dan, an American from Washington DC became our neighbour. He had entered the proper way so we pumped him for information on what the set up was. Yeap he’d had to provide all his details (name, passport number etc), and they’d even unrolled all his socks doing the bag check. We didn’t fancy our chances of slipping out unnoticed given the security to get in (which is silly when at least 15 people arrive per day by boat to Cabo San Juan de la Guia). We weren’t too worried about paying the entry fee, although it’s expensive and we really preferred not to, it was getting a fine or having to pay a bribe for not entering the proper way that we were more concerned about. Anyhow by some miracle we happened to find a wristband on a beach, so that was one of us sorted and may help to make our story for the other person a little more believable.

The next morning we got up really early as our decision to stay there for 2 days left us with a really long travel day as we wanted to cross the border and get to the nearest big city in Venezuela. We also wanted to do the walk out before it got hot. Dan was also leaving early too as he had to be in Cartagena that evening and he too didn’t fancy the hike in the heat. We thought that we got up at 6am and left and 6:15am but we discovered later in the day that Marie’s watch had sometime, somehow acquired an lost half an hour so we could have left at 5:45am. Dan got up as we left so we said we’d see him later as he was bound to catch us up with our big packs.

We went at a fair pace for a number of reasons: 1) it was early so there was no one else around and there are cocaine processing labs and FARC in the area 2) we wanted to get the hike over and done with because we knew it wasn’t going to be easy and if the sun came out it was going to be a bitch 3) Marie didn’t want to increase our chances of seeing a snake by taking longer, after someone the previous evening kindly told her there were lots of snakes. It took us an hour and a half going at a really decent pace, the sections where the path climbs over rocks etc were tough but manageable. We arrived at Carnaval (the entrance camp) just ahead of Dan who was equally drenched in sweat, lovely! 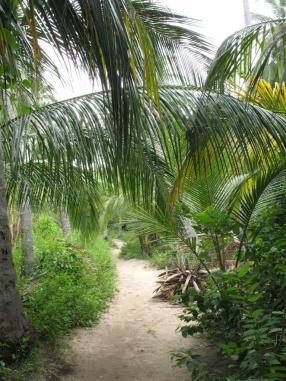 We waited together at some official huts that we thought were the park check point (might have been but there was no one there that early) and then flagged a truck which took us to the park entrance at the junction with the main road. This was where Dan had had to register, pay the fee and have his bag checked. It had barriers and plenty of uniformed guards around but they lifted the barrier for us and we went straight through. The fact that Dan and Marie were both wearing wristbands and Emma a long sleeved shirt might have helped but actually we don’t think they took any notice of the 3 of us leaving (maybe it was too early?).

A bus to Santa Marta rolled up as we got there so Dan jumped on that and we crossed to the other side of the road and with the help of a local flagged a bus to Maicao the border town, where 4 hours later we were tipped out into chaos… 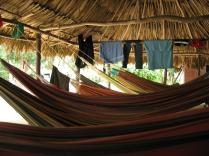