Catching the train from Tupiza to Oruro was bliss – a really nice change from buses, although being in Executive class probably helped as we had more room, seats that reclined way back, videos with English subtitles (although the choice of films left something to be desired, have you ever seen Tom and Huck?), and we got dinner and a drink in the buffet car included in the price. Most people took blankets on with them, always a sign that it’s going to be really freezing, but until we stopped in Uyuni at midnight we had the opposite problem – we were being slowly roasted. After that though the cold outside started to beat the train’s heaters so they gave us all a blanket and pillow, and yeap by morning the windows had frozen on the inside, although we stayed warm. 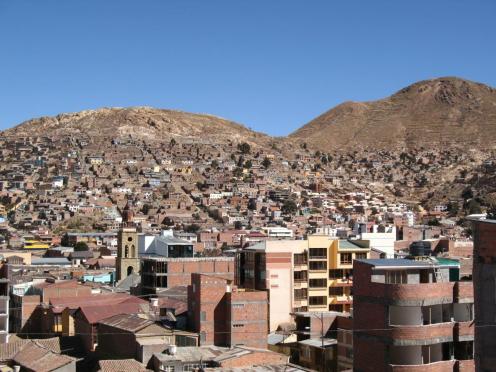 The 12 hour journey flew by and we arrived in Oruro dead on time and were very impressed with the security of the luggage system, the warnings in our guidebook about watching out for bags being snatched is rubbish, the luggage car was all fenced off with the usual tag system to claim your bag back. It couldn’t have been safer (maybe the warning applied to the other train on the same route – the Wara Wara – though).

Sadly there aren’t many trains in South America so that might be our only one (although we’re keen to do the Devil’s Nose train in Ecuador just to ride on the roof!)

So Oruro, it’s the largest town of the Southern Altiplano, population 216,000ish and sits at an altitude of 3702m. The guidebook says that it is a miners city with a tough climate and that in many ways it is the most Bolivian of Bolivia’s 9 provincial capitals. 90% of inhabitants are of indigenous heritage. It hasn’t got many tourist sights and isn’t touristy (we think we may have seen 2 other gringos from a distance so we’re not the only ones here), but we have just enjoyed being in a large Bolivian town (Tupiza is only small approx 40,000 pop).

After we arrived at 7am on Sunday we headed for somewhere that we had plucked out of the guidebook and got a good cheap room, a touch dark but nice wooden floor and tv. It was so early that we think we saw the people who were in the room before us leave and we had to wait while the guy on night attendant duties re-made the beds (literally just re-made! But after inspection they do look clean). The main thing was that the room felt warm so we took it without hesitation, oh and we have cable tv and Emma’s desperate for a tv fix.

I don’t think we have made clear quite how cold it is on the Altiplano. It literally is -15C. On the 4×4 trip from Chile we slept in our silk liners in our sleeping bags under 4 blankets. And that was wearing full thermal underwear, a pair of trousers and a thin fleece on top, 2 pairs of socks (1 thermal) and a hat to bed. We weren’t cold though 🙂 Not sure how many blankets were on the bed here but there were a lot and once under them all you couldn’t move. So a warm room is coveted (even the more upmarket places don’t have any heating).

We thought that we had landed on our feet with this place, until we visited the shared bathrooms. Hmm lets just say there’s no way either of us were taking a shower in them. The toilets were just about usable and cleaning teeth was possible as long as you went for the brush then dive in there for the spit and rinse method.

We could have moved somewhere else, but warm and tv… So yeap we stink, but when the max daytime temp is 14 or so degrees there is only so much that you can stink. When we arrived on Sunday morning it was so cold at 8am that there was no way we were going out until it warmed up so we crawled in bed and watched tv until 11am!

When we did venture out we headed for the bus station as we like to assess our options for leaving and check out the cost and then enjoy wherever we are secure in the knowledge that we know how to leave and there wont be any nasty surprises e.g. stupid arrival or departure times. While we were there we called into the tourist information office to see if they had a free map and it was one of those manned by police, but the policeman was really good!

On the way back from the station we stumbled on what at first we thought was just a firework market (Bolivians LOVE fireworks), a row on each side of the road for at least 3 blocks. By the time we were on the 4th block of fireworks a few other goods had begun to sneak in and eventually we stumbled across a massive sprawling street market selling everything under the sun. It’s huge and goes for blocks and blocks in every direction and causes traffic chaos. We scored ourselves some luxury toilet roll (not the cheap pink stuff that is peddled everywhere in Bolivia) and Marie got some socks (3 pairs for NZ$2, but bright pink, blue and green) as she made the mistake of packing her scruffiest underwear for the trip and has now realised that none will probably last the trip!

We spent hours exploring the market before meandering through the town centre checking out the sights such as churches, on the way and up to the Faro de Conchupata where Bolivia’s flag was first raised in 1851. It’s basically not much more than a square with a monument with good views of the town. With the exception of the market area the town was really quiet (Sunday) and it was very peaceful up there so we hung out for a while. We spent the rest of the day exploring different parts of town while it was so quiet and discovered that the market carries on into the night with some change in traders and street hawkers so we had another wander through enjoying the different atmosphere.

The town was very different on Monday morning, much busier! But there were also a lot more street vendors selling traditional snacks (that was lunch sorted) and shops were open. We attempted to find the Mineral museum but if was off both of our maps in a suburb of town and every local we asked gave us different directions. We think that we found it in the end but it’s attached to the university and they are currently on holidays so if we did find it, it wasn’t open. We caught a minibus back to the centre because we were knackered and spent the rest of the day taking it easy casually exploring different streets and shops since we now both have coughs/colds and breathing is hard enough at 3,700m anyway.

Tomorrow morning we’re shipping out and heading 4 hours down the road to Cochabamba, our first big Bolivian city.