After an uneventful flight we arrived in Buenos Aires to be greeted by hot humid weather – just like landing in Asia only not quite as hot. Turns out this must have been a blip as the last 2 days have been only warm, and cloudy with a couple of good heavy showers thrown in.

Our hotel is very olde worlde and in a great location. Got the usual tourist rip off from the cab we took from the airport and the driver even had the cheek to try and hit us up for tolls after we were already paying over the odds – so we told him to sling it.

Yesterday we spent about 9 hours walking exploring the city, we did the usual tourist sights – Casa Rosada, Recoleta Cemetry to see Evita´s and all the other rich dudes sarcophagi and San Telmo, home of tango. Today we overslept (we’re blaming jet lag) so after a late start we caught the metro up to the bus station and successfully bought tickets for an over-night bus tomorrow to Puerto Iguazu. There are literally over 200 bus companies based in the station all going to all over South America but we soon found a couple going our way and got something booked.

Next we headed to La Boca via the metro as far as we could because our legs can’t take anymore big hikes at the moment! La Boca is home to Caminito a street with bright painted corrogated buildings and a must see in Buenos Aires.

Unlike the other tourists who were dropped off from their tour buses, we got to explore the neighbourhood, which according to the guidebook is one of the poorest (although the guidebook is pretty crap). It was pretty run down but not too bad and it felt safe enough.

The biggest shock here has been the cost, the cheapest places are comparable with NZ prices and the rest are just plain expensive. We knew that inflation had pushed prices up a lot but even the cost of the metro has risen and that’s going off the information we got from a recent map from a tourist information booth. Prices are 50% plus more than the guidebook. The bus to Puerto Iguazu is costing $150NZ!!! We were planning on travelling quite quickly through Argentina and Chile anyway so that we can spend more time in Bolivia, Peru and Ecuador, but we´ve already busted the budget and if we keep going at this rate we´ll have to travel through even quicker! 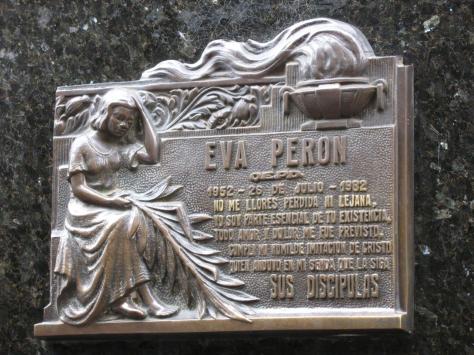